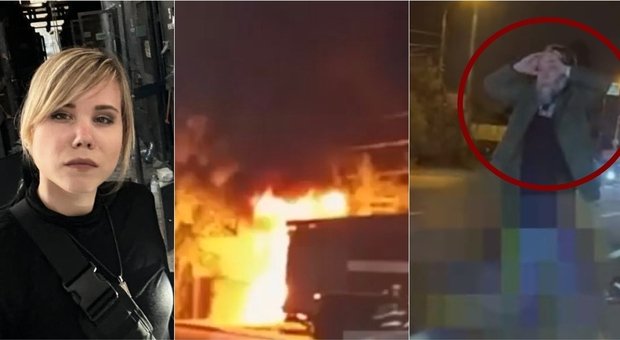 If the explosions in Crimea sent shockwaves through the Russian media spaces in the pas weeks, yesterday’s assassination of Darya Dugina (Platonova), the daughter of a notable Russian propagandist, can only be compared to a nuclear blast in terms of its media effect. We collected and translated the most curios reactions made by a number of Russian influencers, politicians and military experts. Many of these reactions put the Ukrainian trace in this assassination to doubt.

It’s important to note that details of the event are only now starting to come through to the public. Following the incident, the Russian official news outlets deployed a total informational blackout where for several hours none of the notable Russian news sources reported on the event. It was only past midnight in Russia when the so-called “DPR” leader Pushilin announced the death of the woman, which is certainly unusual given that the explosion took place in the Moscow region, far from the war-torn Donbass.

Immediately following the news, the majority of comments were coming from various Telegram channels run by said notable Russian personalities. Most condemned the attack and directly blamed Ukrainians for it. But as we let the news sit for about 12 hours, more interesting conclusions started coming to surface.

We will first start with the typical messaging that dominated the space in the hours following the incident. Here’s the aggressive anti-Ukrainian Andrey Medvedev labelling Ukraine a terrorist state and drawing parallels with attempted murders of Russian Journalists back in April:

When a few months ago the FSB detained militants who were going to kill Vladimir Solovyov and Yevgeny Popov, I remember many grinning condescendingly. “They fabricated the case, obviously, who needs these journalists?”

Dasha Platonova was killed at night. Smart, brave, real, a Russian and a patriot. We were personally well acquainted, she often visited us on Radio Rossiya. She certainly would have become a great philosopher in a few years. She was a unique girl. Unique.

And it doesn’t matter if the Ukrainian saboteurs wanted to kill Dasha or her father, Alexander Dugin.

Something else is important. We are dealing with a terrorist state, if anyone else had doubts, now, I hope, there are no doubts left. There will be more assassination attempts. A terrorist, having started killing, does not stop, he needs more blood, more deaths.

To think that the Kyiv terrorists are somehow different is completely wrong. Terror is terror.

That is, all actions in relation to Ukraine can be built only from the understanding that this is not diplomacy, but anti-terror. Which is unfortunate. And I’m not talking about Ukrainians, not about people. I’m talking about power and the political elite.

The type of assessment made by Medvedev is easily digestible for the wider public, yet certainly not everyone believed it was as straightforward as it might have seemed at the first glance. The Ukrainian defector and Politician Oleg Tsaryov openly questions the validity of Dugin as a victim for the attack by Ukrainians, saying he wouldn’t be a high-priority target: 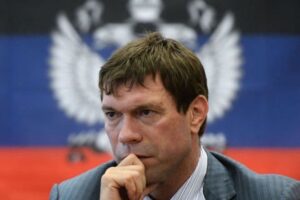 A very strange choice of a target. Now on Ukrainian television they are trying hard to tell the audience who this Dugin is. Dugin was the most famous in the West contemporary Russian philosopher. Alexander Dugin’s contribution to the world of ideas and philosophy is unprecedented, but he was very little known in Ukraine. Alexander Gelyevich, by definition, could not have business conflicts. I have no doubt that many would try to rock the boat and blame the Russian authorities, but, thank God, Dugin’s period of friction with the authorities is long gone. Both father and daughter were often invited to federal channels. This suggests that their point of view coincided with the state mainstream. And I don’t know a government that is more tolerant of its critics, like the current Russian one.

This terrorist attack does not quite fit into the logic of decision-making in Ukraine. A comic is at the helm of the state. For him, the most important thing is the applause of the public. Look, armies are being thrown into slaughter for the sake of a beautiful picture. It seems to me that Ukraine would have chosen a more media-important target.

If you look at who Dasha crossed paths with, there are even fewer versions. It seems to me that if the perpetrators cannot be detained in the near future, unfortunately, the case will remain unsolved.

Is Oleg suspecting the assassination could be an inside job by the Russian security services?

The popular Russian military reporter Vladlen Tatarskiy admits that the attack was aimed to deal a substantial psychological effect similar to the attacks in Crimea, given that Russia cannot be defeated militarily:

Before the special operation, I wrote quite a lot about psychological attacks during the war. Being at the frontline, you think about more practical things that give an immediate result, so it is difficult to comprehend more global processes.

How can Russia be defeated? Of course, it is impossible to do this by military means, there is only one way – psychological operations!

“But how to destroy – that is, kill or capture – the enemy’s manpower, if in the future this manpower is not only the army with a military-capable part of the people standing behind it, but the whole people, from youths to elders … It is necessary to think not about the destruction of the manpower, but the crushing of psychic strength. This is the surest way to victory in the rebellion,” wrote Evgeny Messner.

We see how the Ukrainian side began to carry out actions with goals that are not purely military. Twice the strikes were made at the headquarters of the Black Sea Fleet. The bombing of the headquarters building from a drone does not pose any military threat, the headquarters moved with the start of the special operation, but it has a great psychological effect.

In the spring, at the beginning of the SMO, Ukrainians literally flooded the Internet with videos of captured and dead Russian soldiers, called the relatives of servicemen. The shelling of the funeral of Korsa (Olga Kachura), the murder of Dasha Dugina – all these are goals for striking the psyche of the fighting people. The main goal of psychological operations is not soldiers and military bases, but cultural, civilian objects, various symbols. Based on this concept, a strike on the Crimean bridge is simply inevitable.

We should not only take such actions in response, but also think about the concept of psychological security in times of war. Maybe this is something new in our military science, but we need to start working on such things right now. 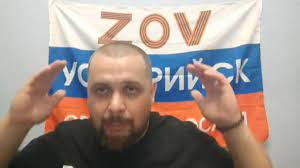 The WarGonzo war reporter project which has been heavily involved with covering the war in Ukraine from the Russian side says it was not the first attempted attack in the heart of Russia and that a “well-organized network” of saboteurs is operating in Moscow region:

In recent weeks, at least two more terrorist attacks have been thwarted in the capital. We have no moral right to tell who exactly they were directed against, but we assure you that the terrorists managed to go far enough. We are against paranoid witch-hunts anywhere (we are for objective and truly competent assessments of the situation), but it must be recognized that in at least one of the cases, the terrorists would not be able to smuggle IEDs without the help of an agent inside the system. The tragedy of Darya Dugina, which took place in this terrorist context, also makes it clear that it was not just some radical psychopath who was recruited for a rare and accidental luck for the SBU. A well-organized network was operating. It operated thoughtfully, methodically, and coordinated. In fact, a terrorist attack was partially carried out in the capital. No, we are not calling anyone for anything now. But we need to face the truth. It’s too late to panic. There are no resources or time for this. Most likely, this is not the last cell used by the UG (“Ukrainian State”) terrorists. There will be more. The sooner we truly realize this, the sooner we can win. Dugin at the location of the incident where his daughter perished

A rather comprehensive analysis by an influential reporter group Rybar clearly states that Ukrainians have nothing to do with the attack, and broader Western powers must be behind it:

The murder of Dasha Dugina: perpetrators, organizers and reasons – analysis of Rybar.

Let’s make it clear right away: we honestly doubt that the Ukrainians are behind the murder of Dasha Dugina. Since most of the @rybar project team knew Dasha and worked together, we decided to share our vision of the situation.

🔻But wait, Ukrainians benefit from it!

Ukrainians are ready to take responsibility for anything and use the media to turn any failure of Russia to their advantage.

You can be a liberal and sing the praises of the Ukrainian army, which is supplied by the whole world, as much as you like, write complimentary odes to Ukrainian information centers, whose actions are led by British specialists, and also admire the work of the Ukrainian special forces, under whose “legend” the SAS units operate.

We are not inclined to downplay the danger of the Anti-Russia project, to underestimate the capabilities of the Ukrainian General Staff and troops. But we are well aware that of the “Ukrainian” there is only the color of the flag, and behind everything else is the collective West.

And one cannot deny the objective reality: a typical Western Ukrainian is a master of appeasing Western partners during the day, and in the evenings presenting himself as a fury of the entire civilized society, with a gun. Which may even fire.

To make an attempt to liquidate the father of Great Russian nationalism? Not their level, not their handwriting, not their style.

🔻Ok, but then who? Jews? Brits? Americans? Satanists?

Always in such cases it is necessary to ask typical questions: Cui bono? Cui prodest?

As long as Alexander Dugin “stayed in the game” and played a significant role in ideological issues under Vladimir Putin, no one touched him. But around 2018, he gradually began to retire. And in such matters – when a person is engaged in other vital and annoying things – the entrance is always a ruble, and the exit is not provided at all.

And for ideas about Great Russian nationalism, many wanted to tear off Dugin’s skin alive. This is a sufficient reason not just for negativity, but for personal hatred on the part of external forces who are haunted by the existence of Russia on the world map.

It can be assumed that some specialists – with the help from inside Russia – under the guise of refugees entered the territory of Russia from Ukraine and carried out an operation, as a result of which Dasha was mistakenly killed. But there is too little data to say for sure who exactly was the perpetrator. Yes, and it’s not that important.

But the organizers – they are there, sitting on the stands of the transhumanistic UN, OSCE, EU and NATO.

🔻But this is a terrorist attack in the very heart of Russia, these are not even regions bordering Ukraine!

Yes. And that makes it even crazier.

Because if in the Bryansk, Kursk and Belgorod regions they have already understood that there is a real war for survival, then here, in the center, the events in Ukraine are perceived as an annoying soap opera.

The very fact that such a thing is possible, and even more so, not somewhere in the border area, but in Moscow, causes deep regret.

It is unclear what Russia’s actions will be following the incident, but we are looking forward to hearing more from these individuals as they are frantically trying to find those guilty for the attack, seemingly forgetting it was Russia who started the war in the first place.