Translation: Russian-issued guidelines for agitators in the temporarily occupied territories of Ukraine.

Here we publish a translation of guidelines that the agitators in the temporarily occupied territories of Ukraine have issued to convince the population they are not marauders or murderers. The detailed translation was provided by https://twitter.com/Janat_H1 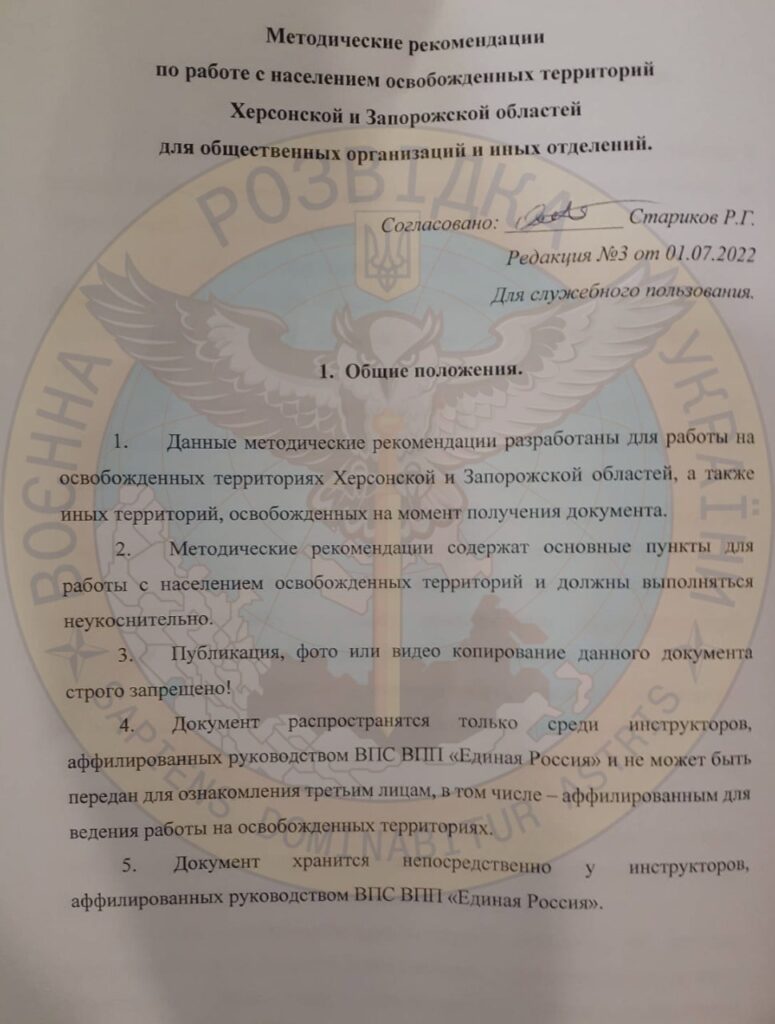 The guidelines were issued on 1 July 2022, and the original files published by the Ukrainian GUR can be found on GUR’s Facebook page:

Now, to the contents.

– As stated in the preamble, “the document is distributed exclusively to instructors affiliated with the leadership of “United Russia” and cannot be passed on to third parties for review.”

1. These guidelines have been developed for work in the liberated territories of the Kherson and Zaporozhye regions, as well as other territories liberated at the time of receipt of the document.

2. The guidelines contain the main points for working with the population of the liberated territories and must be strictly followed.

3. Publication, photo, or video copying of this document is strictly prohibited!

4. The document will be distributed ONLY among instructors affiliated with the leadership of “United Russia” and cannot be transferred for familiarization to third parties, including those affiliated to work in the liberated territories.

5. The document is kept directly by the instructors affiliated with the leadership of the “United Russia” political party.

It follows from the document that the Kremlin party “United Russia” is determined to be the only body that supervises the work of the occupation administrations in the captured Ukrainian territories. Any other organisations can appear with the approval and strict control of Putin’s party. On the other hand, the very connection of the occupation structures with “United Russia” is classified information and cannot be disclosed.

2. Organization of work and collection of humanitarian aid

1. Public organizations engaged in the assembly, delivery and distribution of humanitarian cargo must be registered on the territory of the Russian Federation.

2. To work with the local population of the liberated territories of the Kherson and Zaporozhye regions, only persons approved by the instructors of “United Russia” or other authorized structures are allowed.

3. It is forbidden to allow people with an unstable psyche, serious health problems, as well as people who have an incorrect vision of the political situation around these territories to work.

4. Already existing organizations with experience in organizing the delivery and distribution of humanitarian cargo are allowed to work.

5. It is allowed to collect material resources from the population on a voluntary basis, as well as sponsorship by affiliated representatives of small and medium-sized businesses.

6. It is forbidden to accept food products, as well as medicines (including hermetically sealed ones) from third parties due to the increasing cases of attempts to poison the military personnel of the RF Armed Forces, as well as the population of the liberated territories.

7. It is forbidden to accept from the public any equipment, including mobile phones and dual-use equipment due to the possibility of installing tracking devices.

8. When forming a group, it should be taken into account that the delivery of humanitarian cargo is carried out jointly with representatives of law enforcement agencies and other persons delegated by the military-civilian administrations of the region.

According to the “methodology”, the occupiers are allowed to “collect material funds from the population”. On the opposite, it is strictly forbidden to take food products and medicines (including hermetically sealed ones) due to frequent cases of poisoning.

3. Organization of the delivery of humanitarian cargo

2. Delivery of goods is carried out by transportation by road through the “Chongar”  checkpoint.

3. The route of movement through the liberated territories of the Kherson and Zaporozhye regions is coordinated with representatives of the Armed Forces of the Russian Federation.

4. All transport routes included in the itinerary are the only safe ones for the movement of humanitarian cargo.

5. When passing through border control, persons delivering humanitarian cargo must have with them:

5.2. Documents confirming belonging to an organization that delivers humanitarian cargo.

5.3. A detailed inventory of humanitarian cargo, certified by the head of the organization.

5.4. Route sheet of the organization.

5.5. Other documents confirming the intention to deliver humanitarian cargo.

6. When delivering humanitarian cargo, the degree of population needs must be taken into account, the needs are approved by the heads of local administrations, village councils, and other structures.

7. Photo and video recordings of the transfer of goods are carried out without specifying any personal data of the persons receiving the humanitarian cargo.

This section simply lists procedures for delivering humanitarian aid to the population. We can only notice that the process is strictly controlled and is allowed to take place on specific roads to avoid ambushes.

4. Work with the population of the liberated territories

1. The work of public organizations that are not associated with the United Russia WFP is necessary in order to establish contact with persons who have no idea about the political system of the Russian Federation, as well as persons who avoid working with political parties and organizations.

2. Communication and coordination with the bodies of “United Russia” are confidential for the population of the liberated territories and are not disclosed when working with the population.

3. To carry out the work, the least protected segments of the population should be selected as the target audience, including large families, retirees, and others (lists of persons falling under these categories can be clarified with the heads of local administrations, village elders).

4. Humanitarian aid is provided impersonally on behalf of all citizens of the Russian Federation.

5. Answers to the frequently asked questions can be found in Table No. 1 of the appendix to this document.

6. In case of encountering resistance and manifestation of active aggression against persons delivering humanitarian supplies from the local population of the liberated territories, it is necessary to urgently leave the territory and inform the local representation of law enforcement agencies.

7. When encountering armed resistance and moving unaccompanied by the Ministry of Internal Affairs, the Military Police of the Russian Federation, or the military units of the DPR and LPR, it is necessary to notify the previously mentioned authorities urgently.

We can judge from the documents that the agitators are encouraged to work with the most vulnerable members of the society in the occupied territories, including large families and the elderly. Additionally, those who refuse to accept humanitarian aid from the invaders are at risk of being pursued by the occupational law enforcement bodies.

5. Arrival and departure according to the itinerary

2. Coordination en route may be carried out by representatives of the authorities indicated above.

3. In the event of an air raid warning en route, it is urgent to find the nearest shelter in houses and buildings that can withstand the impact of shells.

4. Stopping in the forests without the knowledge of representatives of the Ministry of Internal Affairs and the Military Police of the Russian Federation is prohibited due to the presence of mining in a number of territories.

5. Stopping in villages without the knowledge and escort of representatives of the Ministry of Internal Affairs, the Military Police of the Russian Federation, and army units of the DPR and LPR is prohibited.

Clearly there are few safe zones for the occupational authorities as they are prohibited from stationing in forests or even local villages due to a risk to their lives. This leaves us wondering what they are hoping to achieve in lands where danger awaits for them in every corner.

The following tables contains answers to the questions frequently asked by the locals. There is a lot of unpack here, but a few notable examples include question 11 – if someone doesn’t want to live in Russia, the agitators are encouraged to contact law enforcement agencies, or question 19 where the instructor must state they are not affiliated with any political party, despite this exact document contradicting this. Traditionally, any mention of legal president Zelenskiy should get an answer stating he is a drug addict, as we see in the question 28.

Do we even need to touch upon question 4?