Ukrainian news portal Censor.net published an interview with Azov fighter Anton “Krama” Kraminskyi who is currently in Russian capture. During the interrogation, our soldier refuted Russian propaganda fakes about Nazis with swastikas in “Azov”, about the killing of civilians by Azov, Bandera, the history of Ukraine, foreign mercenaries, treatment of Russian prisoners, shelling of civilian objects and more. 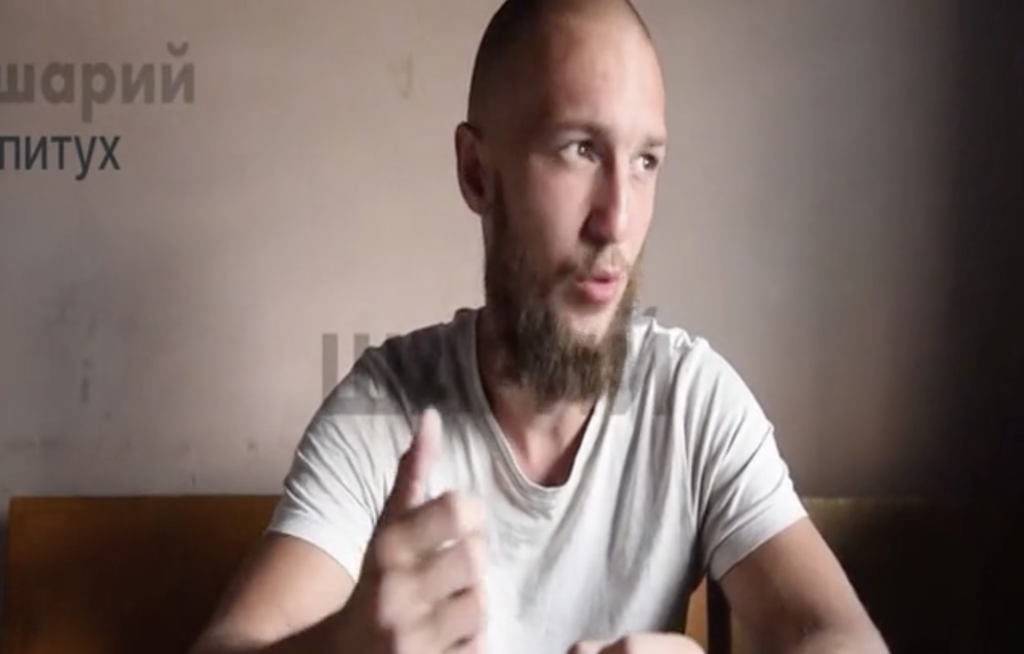 Translated transcript of the interview provided below:

(K): Since late 2014. […] In Maryinka? Yes, I was there. I was not a sniper back then. I became a sniper… well, I became a rifleman in around 2019. […] In Maryinka last time I was in 2017. […] I can tell you that, if we are sitting here and talking, anything can be attributed to us, any swastikas or anything else, but we had military etiquette, and we never shot civilians or children, we are military, our goal is to defend our motherland. I was shot at, I shot at someone, that’s it. Never in my life *I shot* civilians, and neither did anyone from my unit. […] I always demanded the identity to be established. This is our military etiquette. We are not criminals to be killing civilians. […] Which unit is this? I’m… […] I cannot say for the whole of Ukrainian Armed Forces, I’m talking about my own unit and Azov in general. We have a military etiquette, and we never in our lives did this. If you upload this video, know that I never did it, and neither did our unit. […] People like that might be anywhere, but I cannot tell, because I didn’t know and never seen this.

(K): I cannot say, we didn’t count. No one was speaking about this, even within our unit we had no such discussions.

(K): We had such requirements, but… the circumstances made it impossible to do, and it’s never possible to do it in principle, since… you realise that to confirm by saying “I killed someone”, it’s not a confirmation, it can just be a lie. […] We were forced, or rather told to do it, but in such cases we as military realised the seriousness of the situation and no one did any video reports.

(K): 120k UAH. […] Well, first of all the positions *of snipers* were taken where *enemy* concentration points were established, and secondly everyone was trying to ensure no civilians were there. […] Civilians do not die from firefights, from what I’ve seen, but from shelling and mass artillery strikes, and planes. […] I won’t be persuading you, you have your own truth, I’m telling you what I’ve seen with my own eyes. […] You can say that, but people we know from Mariupol were saying the opposite. […] I have no such beliefs, I am not a Nazi, I’m a military. I have no Swastikas. […] I have runes and “Wiking”, and cossack *tattoos*. […] I can say to you, you’re telling me this, this is a cult of 2014. Right now the regiment, and I’m in it from 2014, the regiment since late 2015 has no such people in the regiment who had Swastikas […] This is not true […] In my detachment not a single person has a Swastika, in our special reconnaissance group, not a single Swastika. […] We do not follow the fascist ideology, that’s first… […] I’m a pagan […] What paganism has to do with fascism? […] I was baptised against my will, when I was baptised I couldn’t say that I didn’t want to be baptised. […] Nature is close to my worldview, I believe in the Sun, the wind. […] What 10 commandments? […] I don’t know what 10 commandments you are talking about, but I can tell you, the nature is close to me, I believe in nature. […] I’m also from the East *of Ukraine*, and I think differently, and many of my acquaintances think differently from what you are saying. […] If people wanted to join Russia, they could have got their stuff together and left to Russia.

(K): He’s a national hero of our country. […] If he was cooperating with Germans, Hitler wouldn’t have put him in jail. […] He wouldn’t be in jail. […] Because he is a national hero. […] If he was not from Western but Eastern Ukraine, you would have been speaking differently. […] You’re trying to hurt me but it won’t work, I’m telling you, I know the history of Ukraine very well, and I know how it all was, so this is just your opinion and I can similarly tell you that you don’t know the history of Ukraine.

(K): For what? […] No. […] What law? Who is DPR? I’m not in DPR, I’m in the Russian Federation territory. […] No, I do not recognise, I’m saying that this territory, as of today, is the Russian Federation territory. […] It’s not recognised by anyone *DPR*. […] There were no mercenaries in Azov. These are not mercenaries but volunteers who might have simply come… though I don’t know any. While a mercenary is someone who is getting money, right? […] We could not shell, even in theory, since we didn’t have any shells. […] This is all bollocks, it’s all lies. You know deep down in your soul that… I understand you have a goal to film a beautiful video. […] I’m a military, I know that, and I know the military etiquette of Azov regiment. I know it.

(K): They can be in any unit, I can bring up units from Russia where there will be Swastikas. […] I can tell you about a man how is now in a Moscow hospital, with a Swastika, but you only talk about our Swastikas. […] I have runes, and “Wiking”, that’s it. […] I liked “Wiking”, I read its history, I was interested in how they fought for their lands, and generally fought. […] This is what you want to say…

(K): Of course. […] I know, I followed the news from Russian socials, I realise how long you’ve been saying Mariupol was taken, but it wasn’t taken yet. It’s all propaganda, I understand it. You don’t need to show it, I believe you. […] What laws of yours? I don’t understand which laws I’d be sentenced to prison for. When the court makes a decision, then we talk, but there is nothing to put me in prison for, I’m a prisoner of war, not a criminal, I’m a military. Similarly, military of the Russian Federation are in our capture, and no one is threatening to give them life sentence.

(K): If this was allowed, it wouldn’t be a discussion, I would have asked you to bring a person from the Russian Federation who was in our capture, and you would have heard everything from him. I don’t think he would be shy, he would have told you everything. […] I can tell you about a 12 y.o. girl… *speaks to another man* Wait, I’m talking to this person, I wasn’t talking to you. […] I’m telling you, since we started talking about P.O.W.s, and believe me that P.O.W.s of the Russian Federation are treated very well. […] Of us there are 350 people living in barracks *in capture*. It’s tight but it’s alright. The treatment is fine. We’re fed 3 times a day. I’m saying this honestly, I have no reason to exaggerate this, we are fed, yes. All we need, we are given. And we similarly treated the captives who got into our capture in Mariupol. No one has hurt anyone. […] If you are filming a video, I can publicly say the name of the person, I know the exact unit, who was in our capture. […] I can tell you what happened to him. On that day… can I get another cigarette, please? […] On that day when we were meant to go to outpost, though we didn’t know it yet, we took a captive. It was around 6PM. He was brought to us, we found that he was from Vladivostok, a paratrooper. His name was “Shakh”. He was a Dagestani or something, I don’t know, but he was not of a Slavic nationality. He was brought in, we sat with him, with no masks or handcuffs, we just sat with him and started talking. And we spoke to him, then we received an order to retreat to Azovstal. Together with him, we also had another 8 DPR people, and two more people from the Russian army, I don’t know them, I never spoke to them. After we received the order, we got together, other captives were sitting in a room, we told “Shakh” that 20 minutes after we leave, here’s the key, you can open them. Food is here. You can open them, then your guys will come and you’ll be on your own. That’s what we did. We left, he said “Thanks” and that was it. I’m telling you this honestly. […] Film a video with him and let him speak, so it wouldn’t look as if we are bad, while everyone else is nice. […] Oh, stop it, have a look at Kharkiv, let’s look at our city, and talk. Karazin’s Institute, was it a military object?

(K): Can you imagine what will happen if you shoot anyone? If you show any proof of anything, then we may speak, but otherwise we are just military. […] If the commander made such decision to surrender… not surrender, but exit. […] No, we exited. […] Who’s bombing? It’s all intact in Donetsk. […] I have many friends who are still there today.

(K): […] I’m not pretending, why are you telling me this?! I understand everything perfectly. I know who did this. I can see it in the example of Mariupol. I know what happened in Kharkiv. That’s all. […] I was born in Podgory, in a town near Kharkiv. Shevchenkovo village, which is currently occupied, and I have a granddad there, and my granddad is not telling the best stories from there. […] Born 1949, I think he has no need to lie. When they come and take everything. […] I’m not ashamed, listen, I am not ashamed for what I was doing. I’m a military. I guess over there they also realised we are all military, not criminals. And perhaps they negotiated this way, I don’t know who negotiated with whom and how. Probably. If we were truly considered terrorists, or anyone else, then probably we wouldn’t be given a chance to exit. Right? […] No, seriously, if you gave me a book, I would be grateful. […] It doesn’t matter which, just bring me a book, thank you for this!