Both the Russian and the so-called “L/DPR” forces are known for using crowdsourced equipment on the battlefield. The equipment purchased with money donated by regular Russian citizens includes everything from armoured vests to helmets, sights, and even reconnaissance drones. Dealing with the actual collection of funds, purchase and delivery of the equipment to the frontline are numerous military bloggers and volunteers, some of them amass quite a following, such as “Prizrak Novorossiyi” Telegram source. 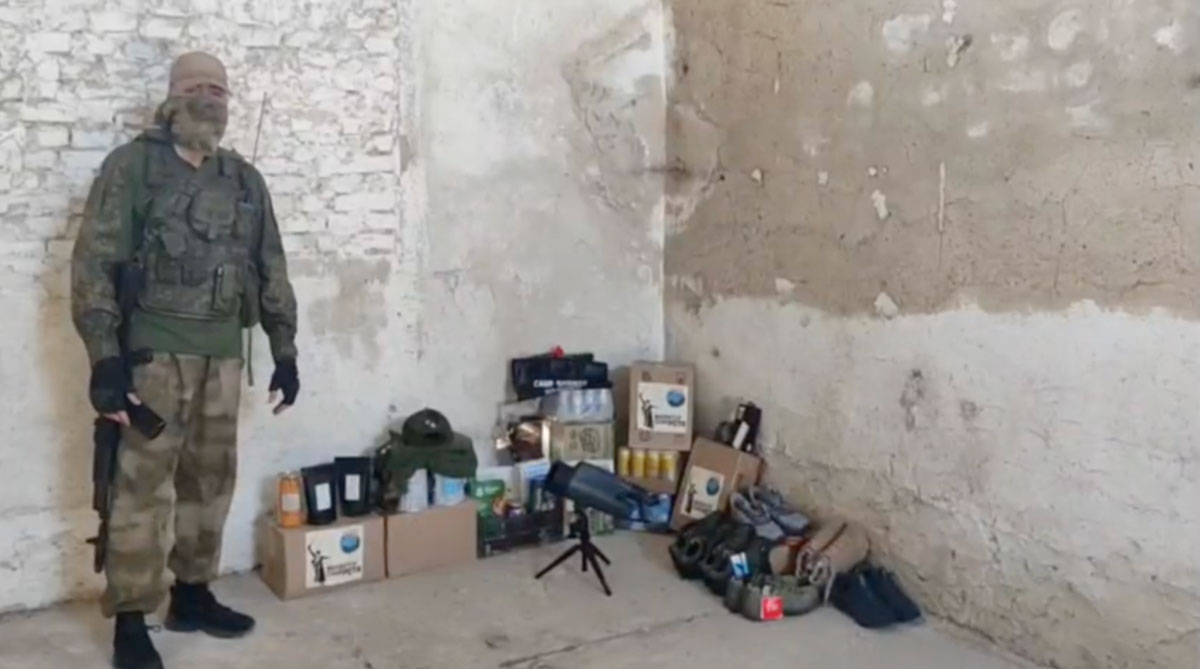 A Russian soldier with crowdsourced equipment thanking those who donated.

The situation with equipment supply is certainly more tense in the so-called “L/DPR” where mobilised forces often lack basic protective equipment. We noticed how some of these volunteers express serious concern about the fact that they have to do the job which the Republic’s leadership is responsible for.

As an example, “Prizrak Novorossiyi” (Ghost of Novorossiya) Telegram channel with 150k followers recently collected donations worth around $2,500, which was only enough to buy a few armoured plates. “Prizrak” made a video with the purchases and complained that they have to do the job which should realistically sit with the leadership. They said:

We provided to the boys from the 00800 unit a couple of armoured plates and two helmets. A terrible deficit, yes. Despite us having an offensive ahead of us, the question of supplying armour is not being resolved. At all. While the position of certain members of the command is – “Find the armour yourself”. Well, whatever. Looks like it won’t change… 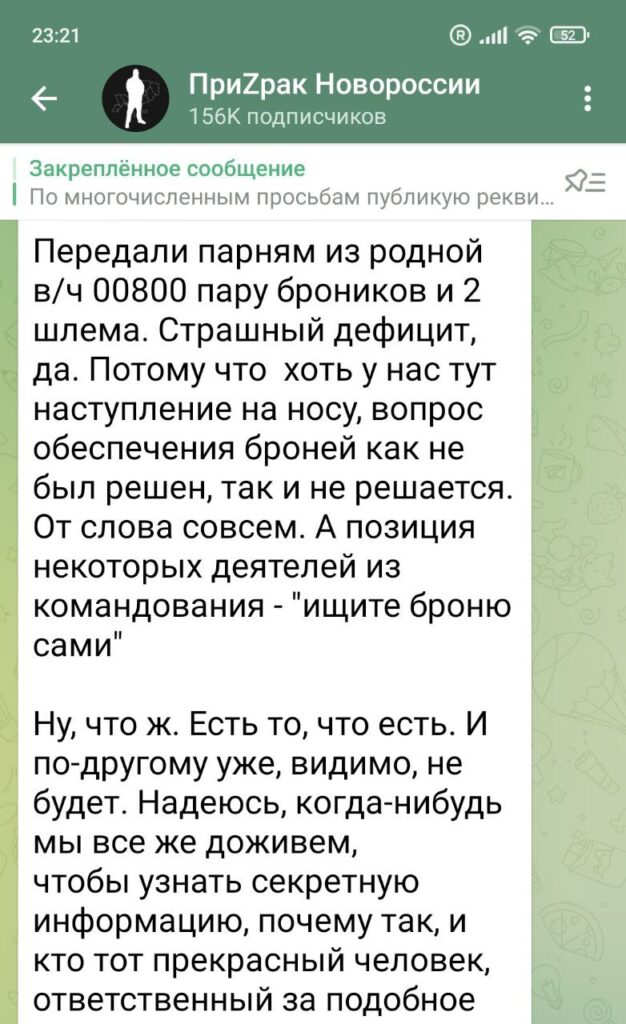 This complaint did not sit well with certain individuals, such as the Crimean “political scientist” Veselovsky (often printed in pro-Russian newspapers), who quoted the above text by “Prizrak” and slammed the author for being overly critical:

Weird volunteer “help”. Appears as if the person is doing the right thing, but flips you off at the same time. Helped for a penny, but sh*t for a quarter, passingly sh*tting all over the leadership of the [DPR] republic, who “threw the fighters to the mercy of fate”.

“Prizrak Novorossyi”, however, had to respond, and respond they did, blaming Veselovsky of openly disregarding the needs of common soldiers fighting on the frontlines. In fact, they published a whole tirade to their 150k+ following:

Veselovsky, why didn’t you give a link to the full video, but modestly limited yourself to a screenshot? You’re a p*ssy rat.

Do you want to talk about the armour and personal protection equipment, you cheap c*nts? “Helped for a penny” – these two kevlar helmets and armoured vests with plates inside them right NOW cost 120-160k rubles in total, if lucky to find and buy. If lucky. That’s a “penny” for you? Or for you and your salary, this is not a “penny”? For us, it is not a penny. And for the boys it is not a penny. Considering that you won’t even find this in the DPR. You, scum, when was the last time you tried buying anything for the fighters? Or at least finding it? Or are you surprised by the fact that they come to me, and not the Republic’s leadership? It’s because they know there is no point going to the leadership of the Republics. And they just put up with it.

Or do you want to talk how in Donetsk, while in Mariupol the most intense fights were on-going, armour and helmets for 80k rubles per set were laying in warehouses, but we didn’t have 4.5 million to buy them out? And they stayed there while our boys were being killed without armour. But you, cheap c*nt, won’t write about this, right? Similarly, how after 5 months of the WAR, the question of personal protection still remains open. It’s just that everyone’s now sick of discussing it and gave up after seeing the absence of sense in these conversations, requests and demands.

You won’t write about the deficit right now. You won’t write how the leadership responds to the requests of fighters with “Find the armour yourself”.

You won’t write how they are given armoured vests which saw Afghanistan, that burst at seams, but according to reports, they have them. Or will you? Or that all the plates are not made of cermet or UHMWPE, but rather simple armoured steel with no anti-ricochet coating. And only the front plate. I’m not even saying that all of these are CONSUMABLES, which must be continuously replaced.

That’s how we’ve been preparing for 8 years for the INEVITABLE WAR, while you, shameless scum, were saying how everything was great, how we can beat the ukrs “in 3 days with our left hand”. And you shut the mouths of those who tried to show the situation as it was.

You aren’t just scum and c*nts, you are epic scum and c*nts, who, even after the five months of what has happened continue your disgusting activity, without even wiping off the “God’s dew” from your p*ssed up eyes. There is no bottom for you.

You have the blood of the best of our people on you. You have their deaths on you. Their deaths from the lack of armour, tourniquets, emergency bandages (f*cking tourniquets and emergency bandages!!!), hemostatics or a simple inability of provide basic assistance, which none of the mobilisation reserve was trained for in 8 years. And now the initiative guys are trying to do it in haste. Because there’s no one else to do it, and at the top they don’t care. But you, scum, were silent and shut everyone’s mouths. Their crippled lives are on your conscience.

You are unscrupulous repulsing security fulfilling any whim of similarly unscrupulous generals and officials with fish eyes, who don’t care about anyone except for their families and their wallets.

Such conflicts are happening continuously. We mentioned a certain LPR blogger Murz who had become quite well-know for describing to his followers the dire situation with supplies of the mobilised forces. In the past few weeks, after police visited Murz’s home in Russia, he went quiet, and rarely posts anymore.

This is not the only time “Prizrak Novorossiyi” complained about the poor equipment provided to the troops. Quoting an anonymous separatist fighter who mentioned the “find the armour yourself” quote, he posted the following short message a few days ago, where he allegedly hints at the fact that some officials in the so-called Republics do help to transfer supplies quicker, behind the backs of the “official” officials:

Today I even gave away my own helmet. Not the worst one. But the guys need it more.
Because as I understand it, they do not intend to solve the situation with personal armour protection.

Leadership quote: “Find the armour yourself”

Thanks to the advisers for honesty. This is said without irony. At all.

That would have saved a lot of time. Instead of fooling people.

It appears that the internal security and customs services within the Republics are obstructing the delivery of the supplies – we will investigate more on this in the future.

As the invasion of Ukraine rages on, we are likely to see these tensions between various Russian military bloggers and volunteers increase. After all, consumables are just that, consumables, and if the state is unable to provide the essentials to the fighters, the “crowdsourced war” becomes more and more tiresome for the attacker.