in Russian Accounts
|
by WarTranslated
An account of a so-called DPR citizen on livejournal, named Artelyero, describes the difficult situation the local men are facing while being forcibly mobilised into the armed forces of the republic. The process which started at the end of February continues, and we have seen criticisms of this process from a number of pro-Russian sources, including Igor Girkin. Here Artelyero describes mobilisation as “mogilisation” [en. “mogila”, rus. “могила” = “grave”, thus translation is “graveisation”], and has been providing useful accounts for several months now. His message from 4 August is as follows:

This hell which is happening here with “mogilisation” that started here back in February and does not stop to this day, cannot be commented on with any cultural words. This is the same terror as ukrs’ shelling of cities. People are just stupidly destroyed from two sides, one of which was supposed to “protect” us. Actually, I remember reading something about standing behind the backs…

These are chronicles just for today [4 August]. By the way, I monitor the situation on the other side too, in the large cities of the left-bank Ukraine, in similar local chats. So, even half of what is happening here does not happen there, but nearly every day the Russian propaganda tells about the atrocities of the Ukrainian “mogilisation” and the attitude of the local bosses towards the “mogilised” who are thrown into a meat grinder. They are silent about the monstrous, unprecedented horror that is perpetrated here in the Donbass.

Below we include some screengrabs from the Donbass chats where the locals warn each other about spotted enlistment office officers. We can understand that the mobilisation crews often walk around or stand at specific spots in groups of two and more people, preferring shops and stores where people go to buy essentials, but also yards of buildings and bus stops where the chances of catching someone increase. They wear both civilian and military clothing, and occasionally park up on tanks. Locals jokingly call the subpoenas “vacation tickets to Ukraine”. 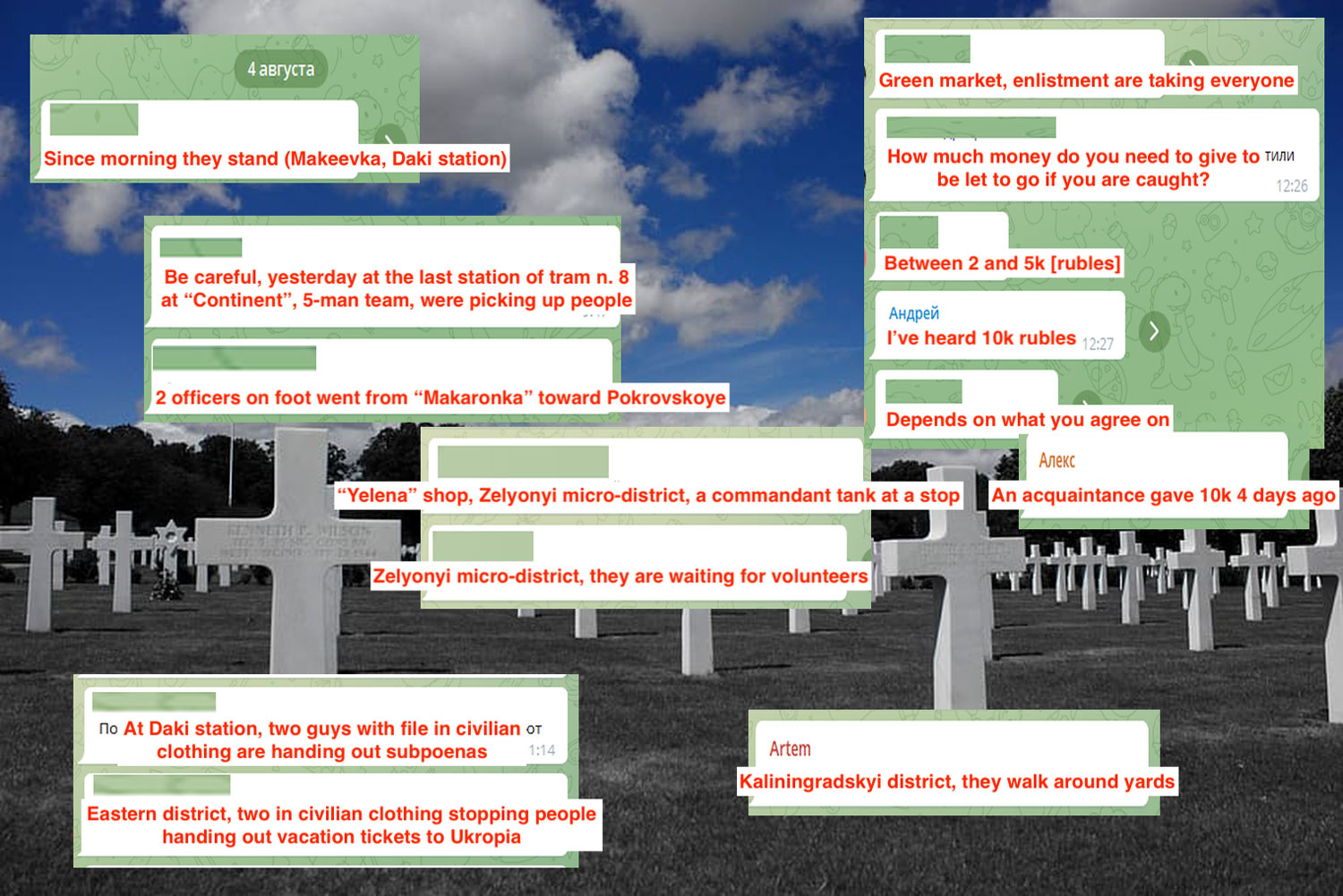 The continued mobilisation is certainly not popular among the locals who hope on joining the Russian Federation to stop this process – Russian citizens in Russia are not being drafted. However, the chances of this happening are close to zero, as locals agree. So far, it is estimated that several dozen thousand men have been mobilised in both republics, and they have taken substantial casualties, so more people are needed. 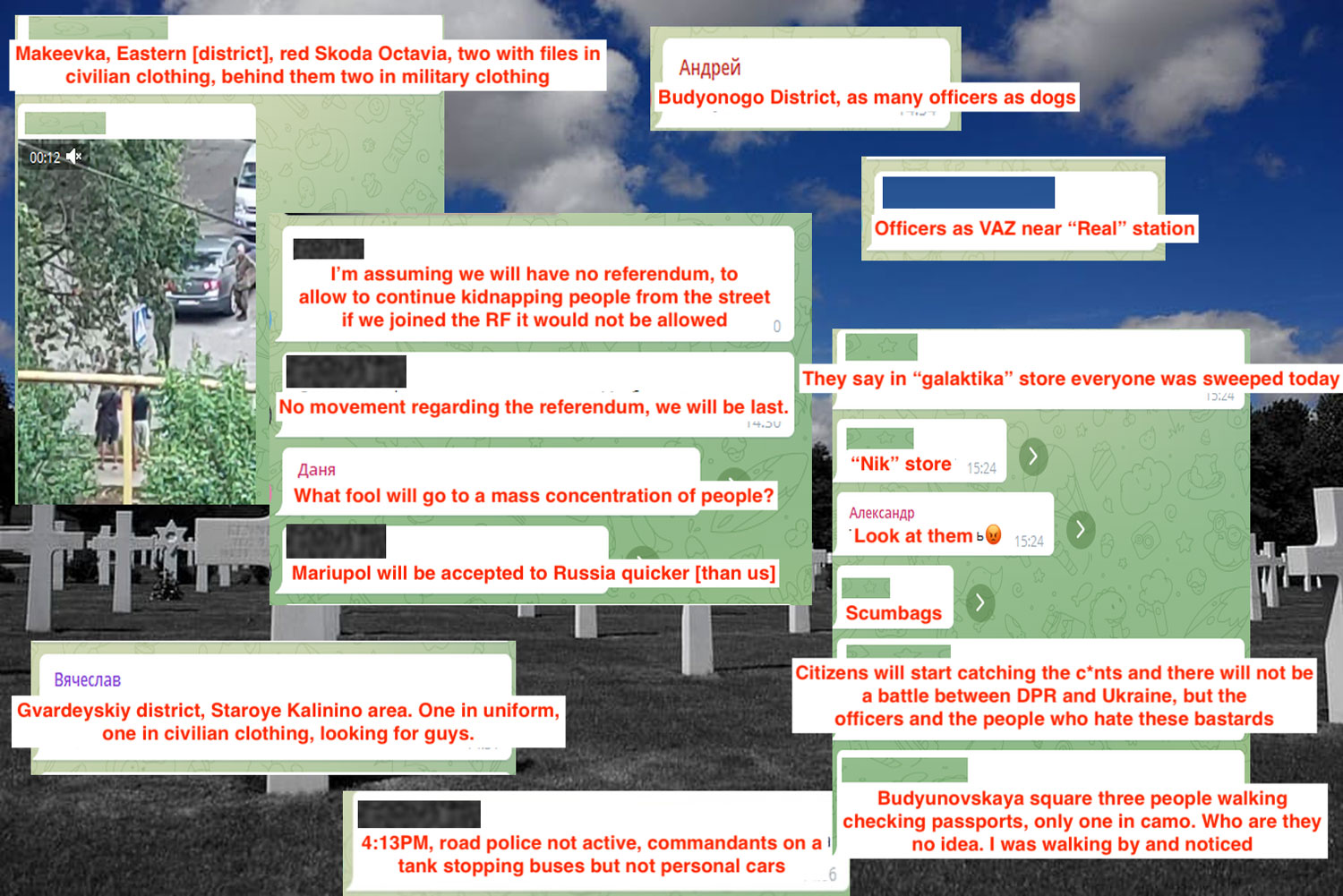 Additionally, while certain citizens seem to be exempt from being drafted, this is usually marked in their passports or by giving them the exemption paperwork. As we can assume from the conversations below, these exemptions are not permanent and must be renewed – this is what the locals likely call “new bookings”. The locals believe that the orders for increased mobilisation are coming from the Russian Federation authorities rather than the DPR. These cannot be objected or argued.

Locals continue giving each other tips on how to best avoid being caught in the streets. 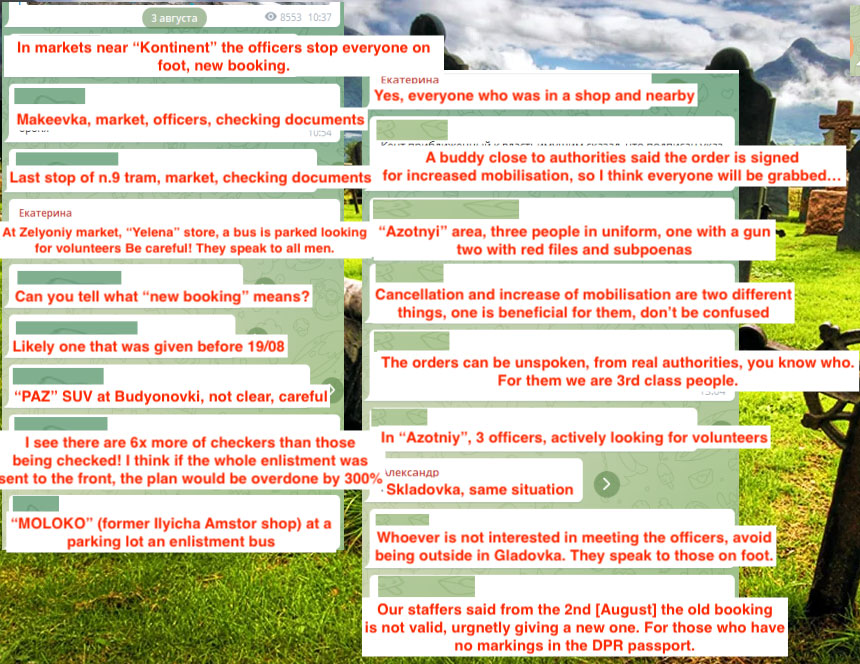 This is only a tiny proportion of all the reports and message exchanges we have seen. This is how Artelyero comments on this. Understandably, we need to read between the lines. Artelyero brings a point, and if we aim to recognise a part of what he says as truth, we must likewise respect the rest of his opinion:

Russian propaganda today [3 August] is massively quoting the words of an American figure, a certain Senator Lindsey Graham, who said, in fact, everything is as it is – “I like the path we are following. As long as we help Ukraine with the weapons it needs, they will fight to the last man.”

As we clearly see from the monstrous “moGilization” over there, the Ukrainians do not really want to fight for the interests of Senator Graham and his colleagues, but they are forcibly driven to the civil war. However, you have already heard all this a hundred times from Russian propagandists.

Meanwhile, not a single Russian “truth-teller” will tell about the horror that is happening here in the Donbass, where people are captured on the streets in broad daylight, [officers] search through shops and write out tickets to the cemetery. The violent burial of the civilian population, which has not stopped since February and has significantly intensified with the next “Verdun”, that is now in the Avdiivka area, where traditionally there are “no losses”…