Russians reacting to the 16 September attacks in Kherson and Luhansk 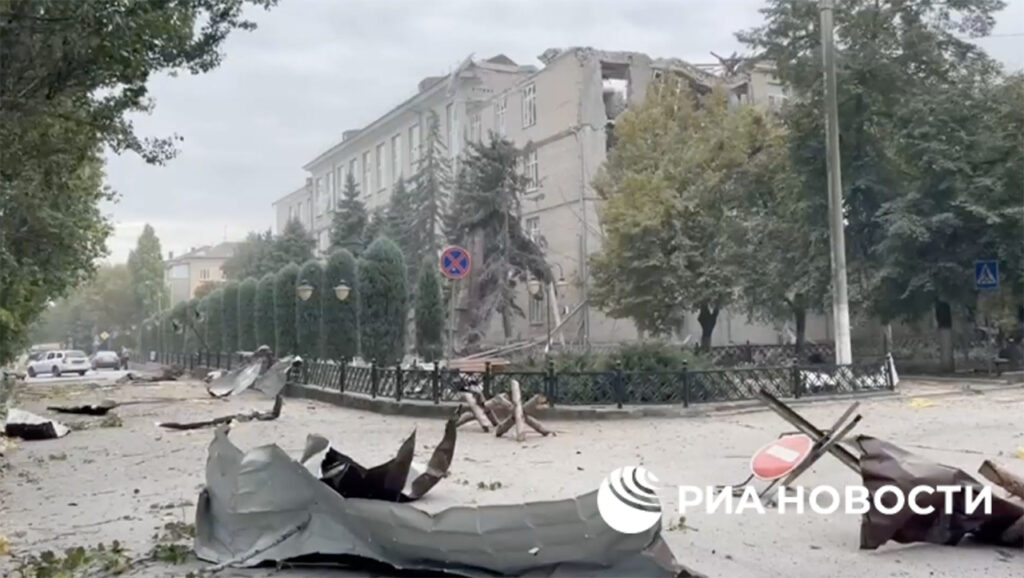 Several missile attacks shook the temporarily occupied areas of Ukraine, Kherson and Luhansk cities specifically. As a result, several occupational officials were killed, including the Prosecutor General of the so-called “LPR”, and officials who were responsible for preparing a “referendum” in Kherson Oblast.

The reaction to these attacks from the Russians was immediate. We collected some of our favourite quotes and translated them for your viewing pleasure.

Donetsk volunteer and collaborator Andrey Zhuchkovsky, a close associate of Girkin and others, believes Russia will struggle to retain trust of “liberated” residents after this attack:

Donetsk, Valuyki, Kherson, Luhansk – a series of attacks with numerous victims, in just one day. It would be strange to expect otherwise after our attacks on Ukrainian infrastructure. The scale and degree of confrontation will only increase. Our main goal should be to attack the supplies Western weapons that allow the Ukrainians to carry out attacks on distant targets with high accuracy. The main goal of the Ukrainians after our Kharkiv defeat is to sow even greater panic and demoralization among the Russians, and they are partly achieving this: there is already a lot of bad news that the inhabitants of the liberated territories are getting rid of Russian symbols in fear of the return of Ukraine. After seven months of the war, it is impossible to imagine anything worse thn this. We will return the lost territories. But how do you get people’s trust back?

Igor Girkin viciously mocks the “LPR” leader Pasechnik for his claims that “these attacks go beyond all limits”, asking whether any of the previous attacks were “within limits”:

“Pasechnik stressed that the explosion in the building of the Prosecutor General’s Office of the LPR showed that the Kyiv regime had gone beyond all limits.”

Everything about this expression is perfect. It’s great that:

– to this day – having killed hundreds of civilians in the Luhansk region for 8 and a half years (including many women and children) – the Kyiv regime (is it possible to call respected Kyiv partners like that?) “did not cross the limits of what is permitted.” Which means that killing people below the rank of the Prosecutor General was allowed and it could be done further, keeping “within the limits.” (The question remained – “who set the framework?”).

– it’s great that Pasechnik is such a moron that he openly said this.

– it’s great that finally it reached the levels of the idiot Pasechnik (in the 9th year), that THEY (the deceitful idiots of Pasechnik’s) are NEXT. So they all either: a) will soon run away; b) either they will try to get through with this thought “to the higher ups”, so that something is done there. And both options are, in fact, quite positive.

(But personally, I’m not sure that for some of those “higher ups” – even the elimination of Pasechnik himself “goes beyond what is permitted”, with which I congratulate the head of the LPR).

Aleksandr “Linguist” Sladkov, the official Russian military reporter calls for the so-called “republics” to use similar methods against Ukraine:

EXPLOSION OF THE GENERAL PROSECUTION OFFICE OF THE LPR AND THE DEATH OF THE PROSECUTOR GENERAL AND ONE EMPLOYEE.

And here is an important question: is it a terrorist attack or sabotage? If it’s a terrorist attack then it means the SBU or the GUR are terrorists who must be destroyed, wherever they are. And this is the business of the Ministry of State Security of the LDNR and the special services of Russia.

If sabotage, then this is a method of warfare, which, again, should be actively used by the Ministry of State Security of the LDPR and the Russian special services.

On the part of Ukraine, this is not a precedent, but a long-established practice.

What are we waiting for?

Military volunteer Zhyvov is not sure whether the West considers Russia a bear or just a plush toy:

Again and again I insist that Russia needs to immediately turn on the maximum brutality regime.

On the other side, Stolenberg comments on the counterattacks of the Armed Forces of Ukraine, and the intelligence of the DPR (and not only it) notices the facts of the presence of NATO officers in the combat zone.

Every time we show indecision, inconsistency and softness in matters of military resolution of the conflict, we bring on our heads new troubles, types of weapons, and NATO’s determination.

The main question for the West was this: is this bear really predatory, smart and fast, or is it a plush toy?

So far they’ve made sure we’re Winnie the Pooh.

Military reporter Kotenok is having a tantrum, once again calling for more brutal actions against Ukraine, wondering why is Zelensky allowed to visit de-occupied Izyum:

Terrible day. The Kyiv regime carried out three terrorist attacks simultaneously aimed at the destruction of persons collaborating with Russia. A strike was dealt at the Kherson administration, the prosecutor general of the LPR was blown up, and the deputy head of the Berdyansk State Administration was shot dead, in fact, the latter [was killed] along with his wife, who was responsible for holding a referendum in the city.

This is not counting the strike on the city of Valuiki in the Belgorod region, where the Armed Forces of Ukraine managed not only to hit the local infrastructure, but also to kill another civilian in Russia. All these are actions of the same order, terror, which becomes the main instrument of Kyiv. Regardless of the official rhetoric of the Ukrainian authorities, in each case there is a specific department and specific performers who will receive titles and orders.

Against this background is Zelensky, who is calmly walking around Izyum, and Zakharova, who promises the next “red lines” in the event that long-range missiles are supplied to Kyiv. The latter looks like an outright mockery, given that Ukraine and the West have crossed absolutely all the red lines that can be.

Perhaps, instead of regular threats, it is worth finally moving to another level of security in the liberated territories? Do not whip up panic and yell that “everything is lost”, but simply admit that the measures that are being taken today, to put it mildly, are insufficient.

Admitting mistakes is normal, especially in war. Especially when over 50 of the richest and most technologically advanced states are fighting against us.

At a minimum, it is necessary to create a new interdepartmental structure, which will have only one goal – to identify enemy agents and defeat the Bandera underground. And there is no need to be afraid of the word “SMERSH” – it is still relevant.

As a maximum, for now, move to a zero tolerance regime for those who are still trying to sit on two chairs, preparing the ground for the return of the Armed Forces of Ukraine. To say that such behavior leads to betrayal is meaningless. This is a betrayal, for which you must answer according to the laws of war.

We still can and must win. Therefore, the main thing today is to protect our people, each of whom has been declared a target of a hunt. Otherwise, we simply won’t have them. In the eyes of Kyiv, the murder of any of them is not just the “liquidation of a collaborator”, it is an attempt to convince the population that Russia will not save them, which means that you must either flee or go over to the side of the Nazis.

And on the contrary, every thwarted assassination attempt is a powerful blow to Ukrainian propaganda, which is based on fear. Take away this tool from Kyiv, hand it over so that they are the ones who are afraid, afraid to the point of trembling in the knees, expecting death every minute – and everything will fall apart for them.

Finally, Russian ideologist, writer, and politician Zakhar Prilepyn believes these attacks were a response to Russia striking Ukrainian infrastructure a few days ago. He also is not sure why nothing is being done by the Russian officials to stop the attacks:

How should we evaluate the signal from the Ukrainian side about several simultaneous terrorist attacks and two demonstrative shellings (Valuiki and Kherson administration)?

It means they have something to answer to the destruction of their infrastructure. They are able to turn the confrontation into a regime of full-scale terror, both in non-de-occupied territories and in Russia.

They have already carried out the necessary mobilisation of society for this.

We didn’t even start it.

The colossal and ramified “peacetime army” in Russia still has a feeling that everything will resolve itself.

On the chevron, Zelensky has the inscription “Ukraine or death.”

A huge part of our political elite (minus Medvedev, Kadyrov, and a few people) has the inscription on the chevron “Let’s make peace and let’s go back, the main thing is to shut up the toxic patriots and keep the hawks from managing the processes.”

And in general, they are succeeding.