Below are translations of various posts and comments made by pro-Russian military bloggers and notable persons about the 12 July Ukrainian strike on Nova Kakhovka ammo cache in Kherson Oblast.

I just received a message about an attack on our beautiful and peaceful Nova Kakhovka. They used the American HIMARS.

What does it mean? The Americans actually went to war with Russia. They are fighting on territory that is actually already Russian.

Why? I answer: Over 10 thousand residents of the Kherson region have already received Russian passports.

This means today’s murders in Nova Kakhovka, sabotage in Kherson – this is murder of the Russians on their land.

It is still difficult for me to predict how the confrontation between the two superpowers will end, but I can say for sure: we are on our own land! Referendum will be!

We will be able to build a Russian paradise instead of a Ukrainian hell!

Each arrival is another point of no return!

Judging by the accuracy of the hit, this is most likely HIMARS. The Armed Forces of Ukraine received powerful high-precision weapons, which are being competently used. I have written more than once on this and I don’t want to set the teeth on edge with my moralising, but I’ll repeat it anyway. A fight against these systems must take form, first of all, in the dispersal of command posts, headquarters and warehouses, as well as the destruction of the transport infrastructure that allows the transfer of these weapons to the left bank of the Dnieper.

Igor Girkin, participant of the War in Donbas, war criminal:

While Kremlin continues leisurely chewing snot, the respected Ukrainian partners continue busily destroying everything they can reach with HIMARS, 777 and Ceasars which our Ministry of Defence (represented by General-chatter Konashenkov and his Radiant Boss – the Plywood Marshall) continues cracking like nuts.

Ukrs are strictly consistent in their primary interests. Their priority is ammunition depots and air defence positions. Just tonight they “put in the air” another ammunitions cache in Nova Kakhovka. The partners have already carefully posted the video online.

From the scene, sources predict very large casualties among civilians and not only – the local police department is completely demolished along with many private residencies.

The fight against such systems like HIMARS must have begun before the start of any hostilities.

It is simply impossible to “disperse” headquarters while having a highly centralised command system with archaic communications. The dispersal of the caches is possible, but for this the loading-unloading of ammunitions must be simplified enormously and automated, which we have already spoken about, but the process is still based on manual labour and basic wooden boxes.

Therefore, a whole range of preparatory measures must be made in advance, which in current conditions will take years, months at best, so it’s too late now.

The physical destruction of such rockets demands an advanced reconnaissance system, primarily aviation, but also control over the battlefield at least a few dozen kilometers deep, which is impossible without a high number of AWACS aircraft which we don’t have, which allows just 4-8 systems to freely manoeuvre from Kharkiv to Kherson and conduct successful fire pressure.

A lot could be said, but in the current situation we will not see a universal and fast solution to this problem.

I often hear people surprised by the inability of the Russian command to adapt to new challenges – high-precision weapons or long-range artillery systems. It is necessary, for example, to disperse the equipment over different forests, move headquarters deep into the territory, and place ammunitions in different locations. But that doesn’t happen. Why?
I recently heard the story of one soldier. He says they heard about HIMARS, we are digging shelters. Suitable senior officer:
“What are you doing?”
“Digging”
“Ah, you p*ssied out?”

Russian commentators reacting to the news of the strike: 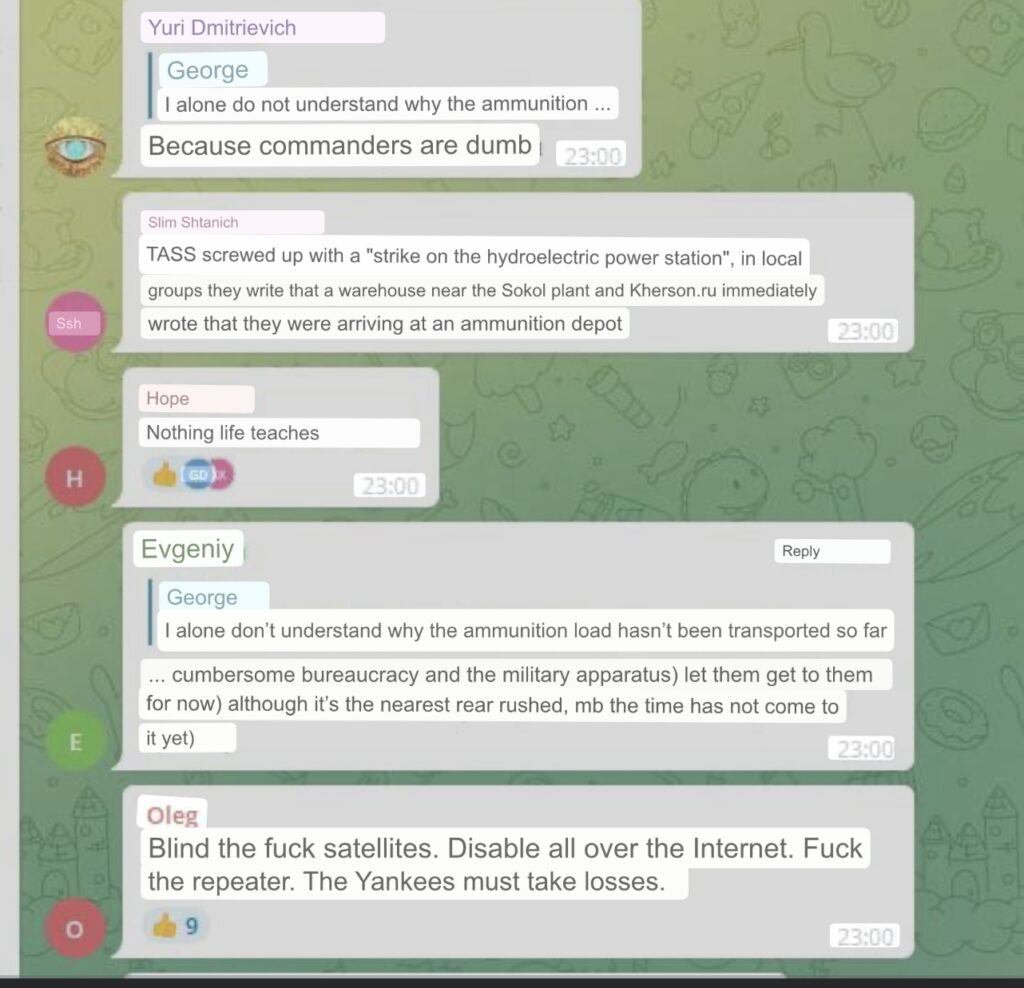 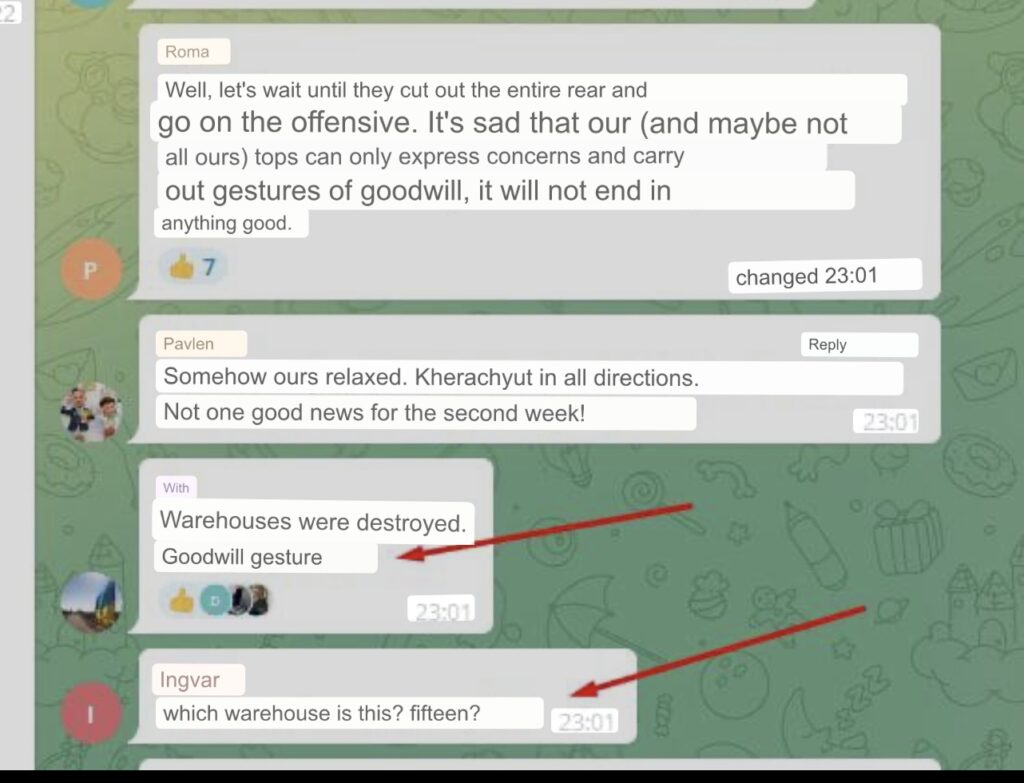 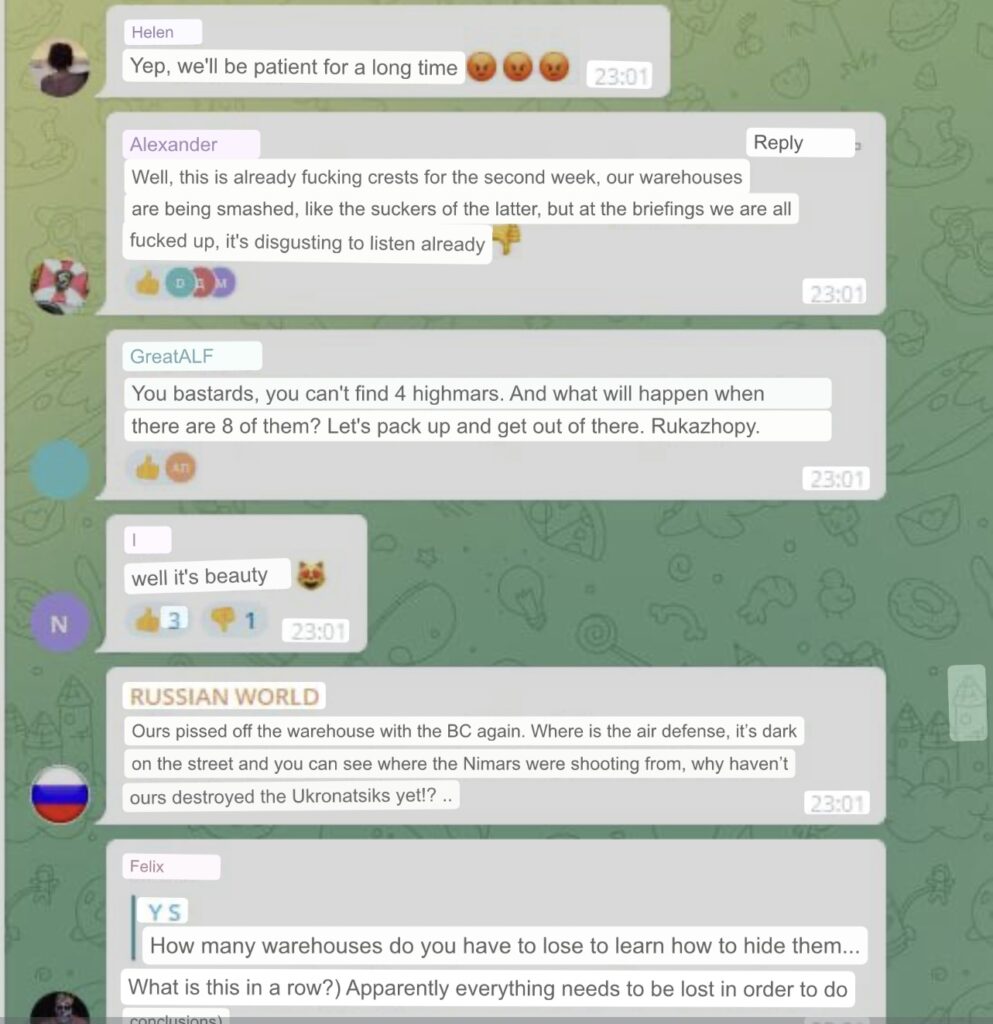 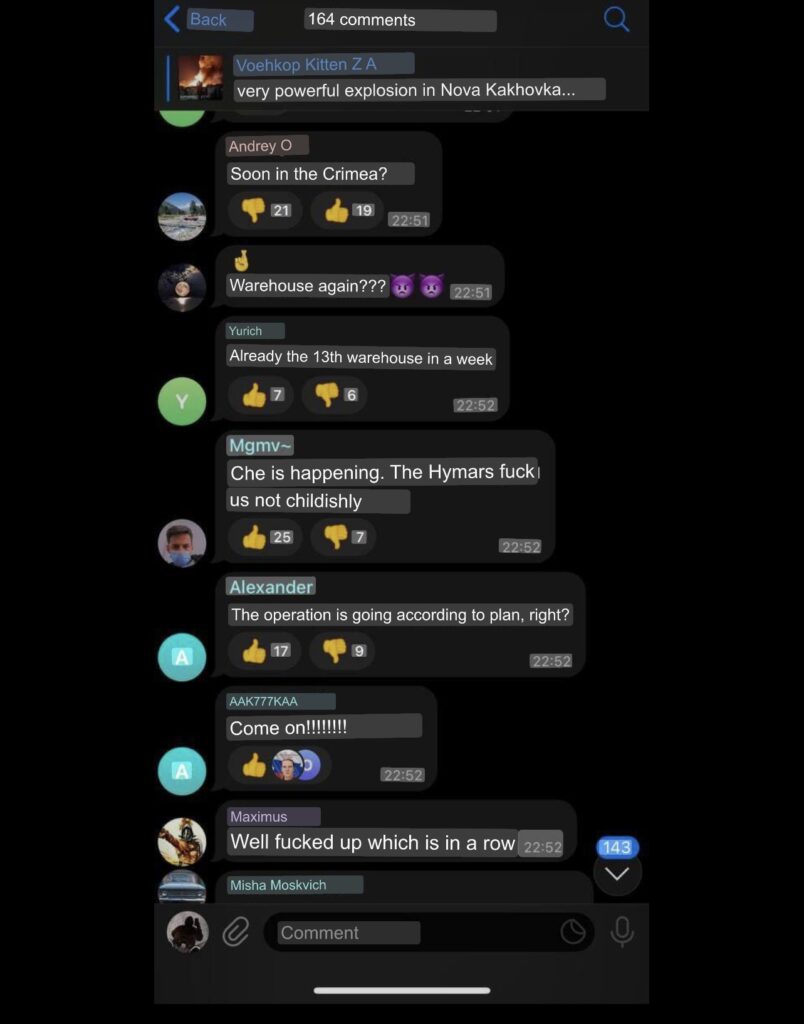