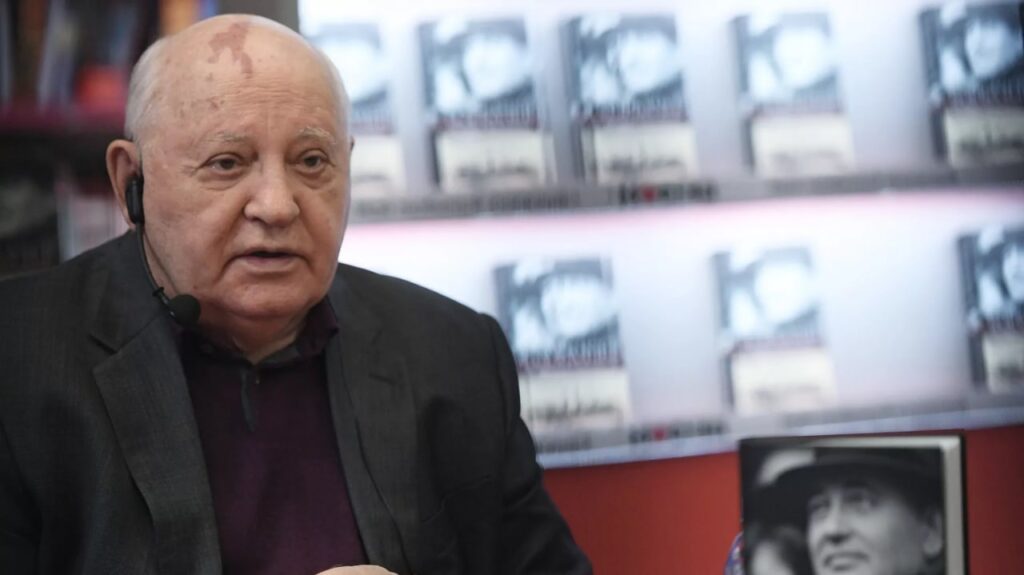 Unlike in the West, in modern Russia late Mikhail Gorbachev was not a popular figure. Many condemn him for his role in dissolution of the USSR. Here’s a brief collection of some recent reactions of various Russian bloggers to demonstrate their opinion.

Igor Girkin with his opinion:

This creature does not need to wish for eternal shame – he has acquired it forever. It makes no sense to curse this creature – contempt is the best that he deserved and deserves.

The only thing I’m curious about is whether he remembered about the Soul before his death and tried at least before his death to rethink and re-evaluate his life? Or did he leave like Vladimir Volfovich [Zhirinovskiy] – without confession and Communion?

Comments turned off – in my opinion – this deceased is not worth it for normal Russian (and not only) people to discuss his death on my page. For me, even dead, he will remain none other than Gorby the Judas.

No one will escape the Doomsday! Gorbachov has died. May the Lord have retribution for him!

Say nothing but good things about the dead [proverb popular in Russia]. But in reality this phrase sounds differently.

“Say nothing but good or true things about the dead” is the saying of the ancient Greek politician and poet Chilon from Sparta (VI century BC).

During one of the broadcasts, the presenter asked me my opinion on the topic of the delivery of drones. I answered – is it possible to use obscene expressions? He sadly answered – it is impossible. I replied that then I’d better keep quiet.

Same here. The truth can and should be spoken, but there are so many emotions, so many words that I’d better keep quiet. I can only say that Gorbachev became a symbol of our defeat and all the troubles that came to us after perestroika.

Since the beginning of the SMO, Mikhail Gorbachev is already the fourth deceased politician who was directly involved in the collapse of the USSR.

Shushkevich, Kravchuk, Stankevich and now Gorbachev. Three signed the Belovezhskaya Accords, which became the unconditional foundation of what is happening today in Ukraine.

And the fourth one brought the country to this fatal Belovezhskaya line.

This, of course, is all some kind of almost mystical coincidence.

Mikhail Gorvachev died. Say nothing but good about the dead. So we will stay silent.

There is a certain mysticism in the fact that 20 minutes before the news arrived, we wanted to publish this survey (about opinion of Gorbachev) – we did not have time. But we don’t believe in any mysticism, so it’s just a coincidence.

And so … they will discuss it for a couple of days and forget. Wasted historical material, absolutely irrelevant in the coming era of tectonic changes.

There is no ecstasy over the death of 92-year-old Gorbachev, but there is annoyance that he died without a verdict by a tribunal that would thoroughly investigate the activities of this man.

President of the RF, Vladimir Putin:

Putin expressed deep condolences regarding the death of Mikhail Gorbachev, in the morning he will send a telegram to relatives and friends – Peskov

A few sources also started polls among their followers to find out their opinion about the death of Gorbachev. The vast majority are either neutral/indifferent or happy, with only tiny percentages expressing sadness about his death. 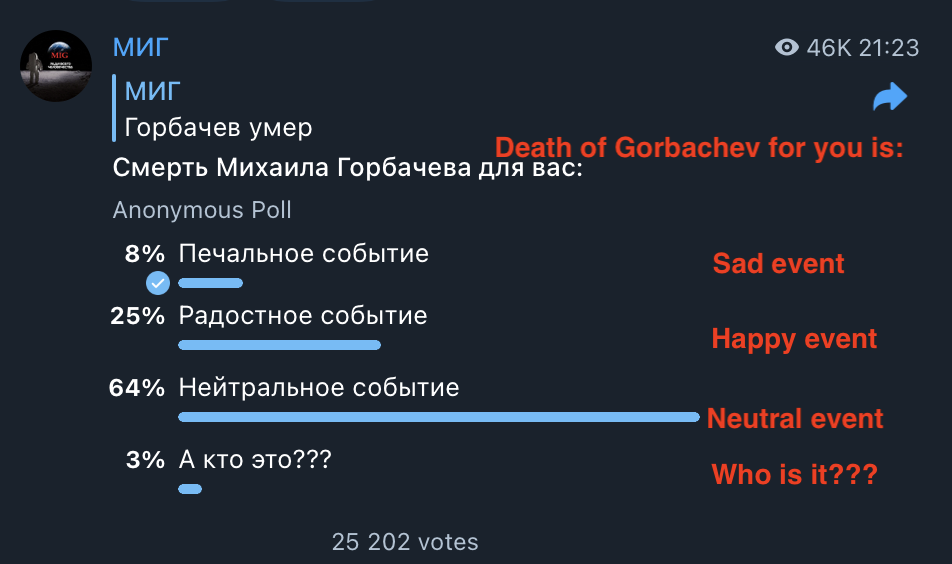