The repeated missile attack by the Armed Forces of Ukraine on the Antonovsky bridge over Dnieper in Kherson Oblast is a leading topic of discussion among the both Ukrainian and Russian commentators and military experts on 27 July. We previously wrote about the first attack on the bridge last week which also sent shockwaves throughout both Ukrainian and Russian spaces. 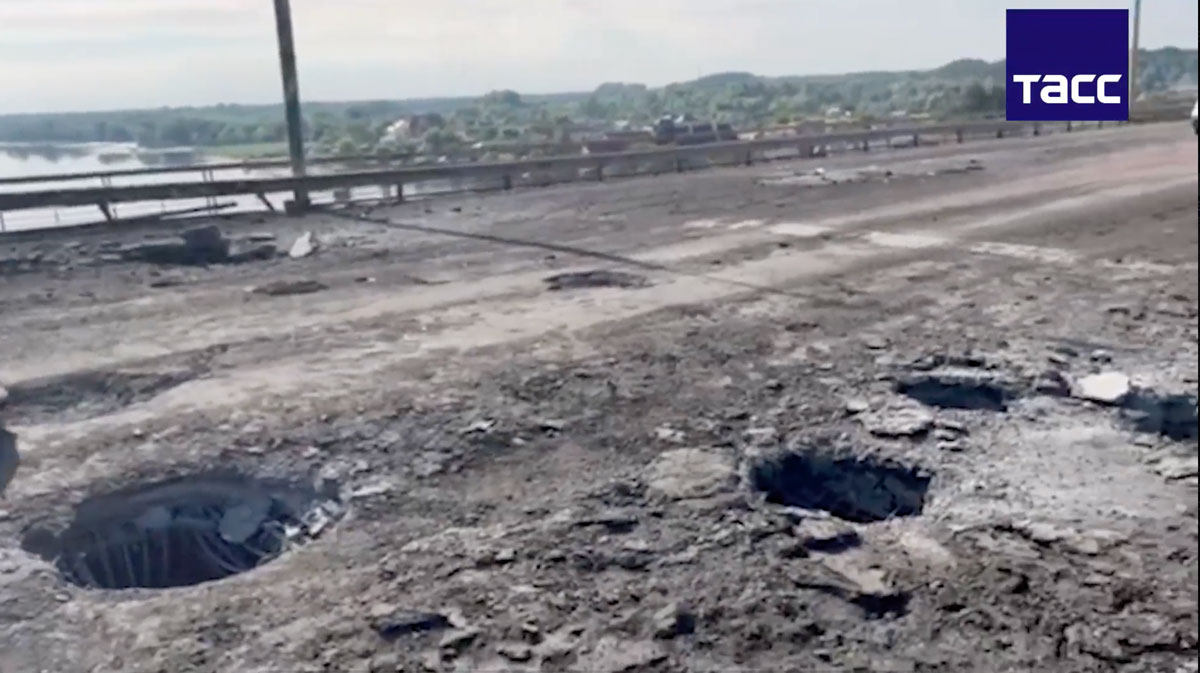 As reports of the strike started coming through on the night of 27 July, unconfirmed claims have been made that the whole bridge was destroyed, which is something that the Russian sources attempted to point at and refute. They chose to attack this claim to distract from the fact that the bridge has been practically disabled. Nevertheless, during the day more reasonable discussions of the consequences of the attack emerged. We have once again collected translated a number of these reports.

Based on this claim, Voennyi Osvedomitel (449k followers) believes that the proposed solutions to build a pontoon bridge might not be effective:

The deputy head of the military-civilian administration of the Kherson region said that during the repair of the Antonovsky bridge, ferry crossings across the Dnieper would be organised.

As we said earlier, repeated attacks by the Armed Forces of Ukraine have led to (so far) a temporary failure of the Antonovsky Bridge, forcing the establishment of ferry and pontoon crossings as an alternative.

There are exactly two problems here. First, the consequences of shelling of the bridge have a cumulative effect, that is, each subsequent attack does more damage than the previous one, not only due to an increase in the number of hits, but also due to an increasing weakening of the canvas structure. Secondly, that alternatives in the form of pontoons / ferries are vulnerable to enemy fire many times more than a large bridge, only one MLRS missile will be enough to disable them.

We are forced to say that the problem with the ongoing attempts of the Armed Forces of Ukraine to cut off the right-bank grouping of the RF Armed Forces from supplies is not being solved. The bet on air defence did not materialise, and attempts to establish alternative crossings and endless repairs will only delay the poor outcome if no steps are taken to destroy the enemy firepower.

A somewhat obscure but nevertheless reasonable analyst Anatoly Nesmiyan (50k followers) points at the precision of the strike which damaged but not destroyed the bridge, and says that this puts the Kherson group of the Russian Armed Forces into danger:

It is reported that this is the destroyed span of the Antonovsky bridge across the Dnieper. This is in fact an advantage of high-precision weapons: they did not destroy the entire structure in half, but carefully and prudently, with the prospect of restoration.

If the photo is not fake, then the situation of the Kherson group is complicated. There are a number of bridges and crossings across the Dnieper, it is possible, in the end, to build a pontoon crossing, but taking into account the accuracy of hits, their fate will be about the same.

The prospects for the Kherson People’s Republic are becoming somewhat uncertain.

The popular Russian military expert Fighterbomber believes that Ukraine is determined to destroy the bridge, and any of the alternative solutions to this crossing are too dangerous:

We can say with confidence that hohols will after all crush the Antonovsky bridge in Kherson, no matter what it costs them.

I hope we have a “plan B” for this case, in the form of pontoons, transport helicopters, ferries and other things.

But it is clear that during the “positional war”, this whole “plan B” will be attacked no less than a bridge.

And I think Kherson was chosen for this role.

Finally, the large war reporter channel Rybar says that the attack on the bridge is not dangerous per se, but is rather aimed at causing panic in the “liberated” territories:

Regarding the “destroyed” Antonovsky bridge in Kherson Oblast.

In order to completely destroy the Antonovsky Bridge, HIMARS and MLRS alone are not enough. Despite the effectiveness of damage on the facilities of the RF Armed Forces, the Armed Forces of Ukraine will not have enough forces and means to guarantee the destruction of the bridge: for this it is necessary to destroy the pylons.

The roadbed can be disabled over and over again – yes, the Armed Forces of Ukraine will be able to. Will it cause problems? Yes. Moreover, given the huge amount of effort on the part of Ukraine and the allies focused on reconnaissance of facilities of the Russian Armed Forces and the movement of military columns, they may try to shell any military equipment marching on the bridge.

But for the most part, it’s not necessary. Now the Armed Forces of Ukraine are solving the problem of systematically whipping up panic in the liberated territories and depleting Russian air defence, which cannot cope with massive strikes.

For an internal audience in Ukraine and the West, a media picture is being created of the systematic reputational failure of the Russian Federation, whose army is not able to protect the liberated territory of the Kherson region.

This is a short-term task in order to show the power and superiority of the Armed Forces of Ukraine, as well as to cover up not reputational, but real failures of Kyiv in the Donbass and other areas.

As the battle for the south of Ukraine unfold, we are likely to see more attacks on the bridge in the nearest future.