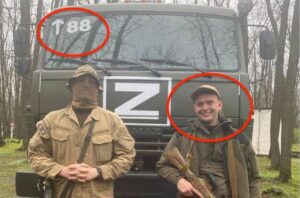 The Russian volunteer Topaz, who is a member of the nazi Rusich unit along with his friend Aleksey Milchakov, is active on Telegram. On 27 December he posted a text describing the serious shell hunger in the Russian forces and made a conclusion that the situation is becoming critical if measures are not taken to cope with the lack of shells.

He also points the attention of readers to the fact that the mobilisation program has not gone as expected as 4 out of 5 mobilised are not combat-ready, and in fact, often sabotage the combat tasks by faking radio interactions.

You know that I try to refrain from loud predictions and insiders, especially negative ones. This is due to the fact that during the war, information is often more destructive than thousands of mines and shells. I especially prefer silence during informational hunger, it is better to post a couple of funny texts than to suck “insiders” and “forecasts” out of your finger. But now I consider it my duty to shed light on the real situation in the SMO zone. So, in summary:

• The Russian army is experiencing a serious shortage of ammunition against the backdrop of active supplies of ammunition to our enemy, this problem is turning from serious to critical. If nothing changes, in the near future the enemy will begin to gain artillery dominance at the frontline.

To understand the depth of the problem, it is necessary to realise the fact that absolutely all the successes of our army, both offensive and defensive, are the result of the superiority of our artillery. There are several options for the development of events, in my opinion:

1. Our side is negotiating the supply of ammunition with one of the few allied countries.

2. We are trying to freeze the conflict on the most shameful terms in order to have time to build up production capacity that will cover the deficit.

3. We decide on a risky, absolutely adventurous tank breakthrough aimed at ensuring that most of the troops can gain a foothold in settlements, and not stand in the open steppe under mines and shells.

•Mobilisation has completely failed. It should be understood that the vast majority – 70-80% of the mobilised military personnel turned out to be unfit for combat for several reasons:

1. Lack of quality military training. Here I don’t see the point in ranting, I can only say that if yesterday’s cashier from the grocery store is driven around in a tank at the training ground for 2 weeks, then he obviously won’t become a good tankman.

2. The lack of ideological motivation of the mobilised due to the lack of clear goals of the SMO, which should be broadcast by the authorities and the media.

3. As a result of the previous paragraph, there is a large-scale intentional and unintentional sabotage of hostilities by the mobilised. For example, men learned to play “radio games”, that is, to simulate the performance of a combat mission on the radio while sitting in a comfortable and safe dugout. With all the resulting victorious exclamations and panicked cries. I’m not even talking about the rampant drunkenness and the complete absence of at least some security measures of countering the enemy’s sabotage activity.

4. After the previous paragraph, a logical question arises – where are the senior comrades, hardened by experience and disciplined, who should restore order and counteract sabotage in the ranks of the mobilised? They are not there, they are fighting in other positions, because some fabulous idiot decided to staff separate, very responsible and important areas only with the mobilised. As a result, we get hundreds dead and wounded in the battle for a pigsty occupied by the Armed Forces of Ukraine, which has no value. And when the mobilised begin to gain the upper hand, the enemy will calmly and orderly retreat covered by an artillery wall, which is becoming easier and easier to implement (see the beginning of the text), and then they will shell the newly occupied positions with HIMARS.

I still have a lot to say about idiots and traitors who will forever burn in hell for every drop of the spilled blood of a Russian soldier, but I think that this is enough to understand the big picture.

What to do? Do not lose faith, unity, and honor. Fight to the end, because the Russian people and our homes are behind us.

We will definitely withstand it.