Now famous Russian blogger in LPR Murz shares his opinion on the below map and various claims about the Ukrainian Armed Forces distributed in the pro-Russian telegram channels: 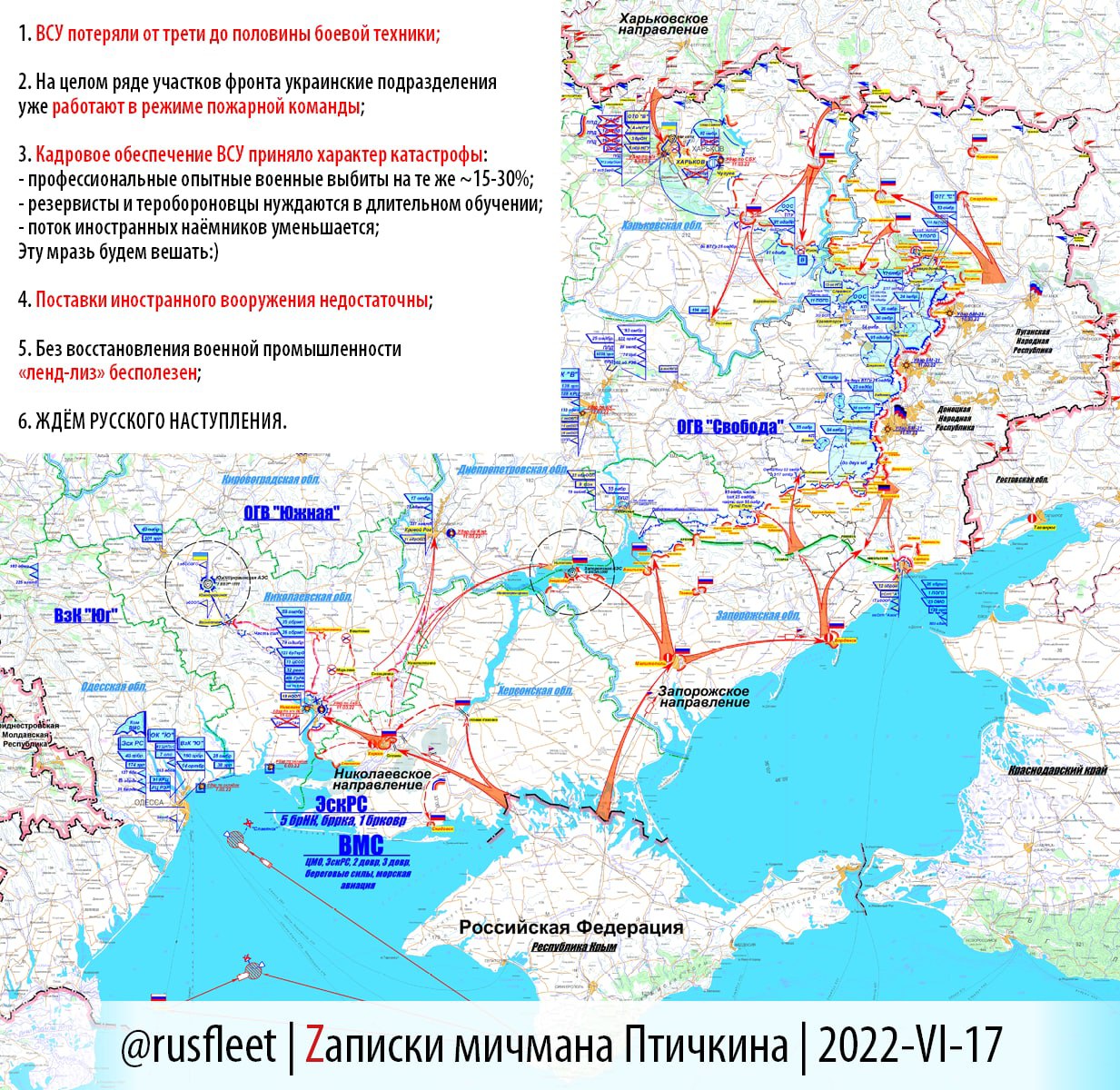 The actual value of the map is beautifully described by the people in the chat who are familiar with the real situation on the frontline:

As you’ve already probably guessed, only the sense of humours saves me from a massive permanent drinking binge similar to the description by the chat members above.

A few words on the theses on the map.

1. UAF have lost between a third and a half of the combat vehicles.

AF RF since the start of the SMO have lost the majority of the modern T-72/90 modifications and the majority of the BMP-3 fleet. Over a month ago the Belohirivka crossing demonstrated not only the monstrous situation with command’s incompetency in some places, but also the fact that RF AF are now fighting with second or third sets of equipment consisting of the same BMP-1 which the Ukrainian army is now receiving from the Eastern European allies. In fact, the UAF have all the chances to soon receive more modern equipment to replenish their losses, but the RF AF and LPR People Militia’s corps have no chance of replenishing with modern produce of our military-industrial complex. It just does not produce enough to replenish, and it won’t be any time soon.

So going to the frontline are T-62s and BMP-1s taken off from storage, and, for example, the radio navigational equipment on these vehicles has either rotted away or is just missing, or represented by R-123 radio stations, meanwhile the UAF have have streamlined deliveries of digital “Motorola”s and GPS-receivers of a military grade. For understanding, if now in one of the tank battalions of the DPR and LPR People’s Militia there is at least one fully combat-ready tank company (out of three or four it is meant to have), then this is a record and a reason for pride. In fact, the majority of the combat-ready vehicles consist of the trophied Ukrainian T-64s which have been captured in a more or less decent state compared to the own T-64 of the people’s militants.

2. In a number of areas of the frontline the Ukrainian units are working in the “fire brigade mode”.

Advancing from our side in those areas of the frontlines are the same “fire brigades” put together from remnants of RF AF and PM Republics, which still retain combat capability.

3. Professional staffing of the UAF is catastrophic: professionals on contract are 15-40% less than before.

In RF AF and LM AF the staffing is much worse, complicated by a mass of Russian refuseniks.

What nonsense! What a rubbish these Ukrainians came up with, right?! Training someone… We throw the mobilised right to the frontline! THAT’S THE IDEA! And certainly, the process for constant training of large combat-ready reserves is non-existent. It’s not created, not being created and it is not known when this bright idea reaches the brains of the command.

Just like Tayra, right? She, by the way, was accused by our propagandists of killing a family couple with a goal of taking possession of their children and fleeing Mariupol. So it’s an obvious war crime which demands hanging. So what? We were either lied to, or exchanging the sons of our generals is more important than punishing the murderer of civilians caught red-handed. The crippled militants, who were lucky to survive in Mariupol, will appreciate this approach, I believe.

4. Supplies of foreign weapons are not enough.

5. Without restoring the military industry, “lend-lease” is useless.

For us, the same. How do we “increase the production of UAVs” in conditions where all the optics for them fell under even more brutal sanctions? We can’t. Same situation in a number of other areas.

RF AF, supposedly equipped with the most modern radios of the closed military radio communications “Azart”, 250,000 rubles of the state budget per each portable unit, are using in combat operations the Chinese radios “Baofeng” which are effortlessly listened by the enemy (2500 rubles for a unit).

Optics, electronics, communications, thermal and night visors are supplied to the army by volunteers.  In reservist units in the 3 months of war even the supplies the most elementary items such as primitive combat medicine tools have not been established, not even saying that reservists are fighting without any proper individual armoured defence.

6. We are waiting for the Russian offensive.