We’ve shared some weeks ago screenshots and translation of comments left by anonymous (and not only) users on the VK.com (Russian social network) page “Life in DPR”. It is a page where users can share concerns, outcries, and general comments about life in the so-called “DPR”. We’ve revisited the latest comments and put together some translations to give you an idea of what the people of the so-called “DPR” are concerned about these days, focusing on posts with the most likes.

It’s important to remember that anyone can send their comments to the page, including people from mainland Ukraine and around the world, therefore it is impossible to verify the authenticity of all these claims.

Understandably, a large proportion of the comments are related to the on-going war and mobilisation of the local population. It is a well-known fact that mobilised men were in large numbers forcibly grabbed from the streets and sent to the frontline. This user addresses the leader of the “DPR” Pushilin himself:

I would like to address Pushilin*. Some years ago you promised that everything will be fantastic, children will live well, economy and army will be in order. And now we are collecting rain water. I understand your water is without muck at the bottom and not rain water at all, but why are you then increasing food and water prices? You’re sweeping men left and right to “pay debt to the motherland”, while you and the rest of your accomplices are sitting in the rears and counting money. But mobilised students will be able to study for free. If they come back alive of course. Thank you so much. Not anonymous.

*leader of the so-called “DPR”

In the “DPR”, university staff was responsible for collecting young students to be mobilised and sent to war. This user blames the rector of the DPR MIA Academy for the death of their 19-year old brother:

Rector of the DPR Ministry of Internal Affairs Academy, Berest Oleg Viktorovych. It is him who was responsible for sending young boys who just recently finished school to the frontline. While he’s sitting in his office and serving his superiors, boys who have not yet seen life are dying at war.

Yesterday my family was notified about the death of my younger brother in the line of duty. He was just 19 years old. He was studying in the second year of the Academy. He should have lived… But the rector decided it was 19-year olds who should be fighting on the frontline. People, God forbid you know the grief that has befallen our family. Do not give your children in the hands of these ruthless people.

The TV propaganda in the so-called “DPR” appears to be quite effective. For instance, this user lists a number of claims that are being made on the “DPR” TV with regards to the Ukrainian army, and slams all of them. While all of these concerns are common knowledge for us, it it does not seem to be the case for the people of the “DPR” who might be limited in their access to information: 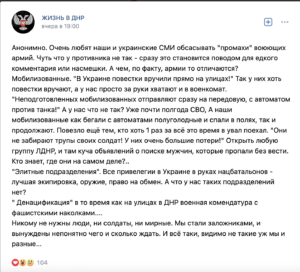 Anonymous. Our own and Ukrainian media really enjoy talking about “misses” of the warring armies. As soon as something goes wrong for the enemy this becomes a reason for caustic comments or ridicule. But in reality, what is the difference between the armies?

Mobilised. “In Ukraine the subpoenas were handed right on the streets!”. At least they give subpoenas, unlike ours who just grab and take you to the enlistment office. “Untrained mobilised are being sent to the frontline with an assault rifle against a tank!” Isn’t it the same for us?! It’s been half a year of the SMO, but our guys are still running hungry and sleeping in the fields. Lucky are those who went on leave at least once! “They are not picking up bodies of their soldiers! They have huge casualties!”. Open any DPR webpage, there will be a bunch of ads looking for men who have gone missing. Who knows where they really are?..

“Elite formations”. All national battalions in Ukraine have the best equipment, weapons, exchange rights. Do we not have the same formations or what?

“Denazification”, meanwhile on the streets of DPR the military commandants are walking around with fascist tattoos…

No one needs people, soldiers or civilians. We became hostages and have to wait for God knows what and how long. And after all, likely we are not that different…

It is fairly common for commentators to attack those who refuse to fight in the war, while other are dying on the frontlines. However, according to this user, no one wants to fight for the country which hasn’t built anything to die for: 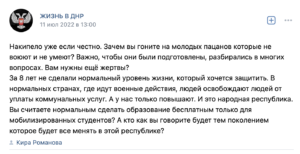 Boiling over by now to be honest. Why are you attacking young boys who can’t and don’t fight? It’s important they are trained and understand a few things. Do you need more casualties?

In 8 years you’ve not made a decent standard of living, which someone would want to protect. In normal countries where hostilities are taking place, people are exempted from paying utility bills. But we are only increasing them. And that’s a People’s Republic. Do you believe it is fine to make education free only for the mobilised students? And who will be that generation which as you say will be changing everything in the republic?

From the more day-to-day concerns, water supply in the DPR has been abysmal for the past 8 years and only got worse with the start of the invasion. What’s confusing to some residents of the DPR is how in some districts, some areas get constant supply of running water, while in others people get nothing: 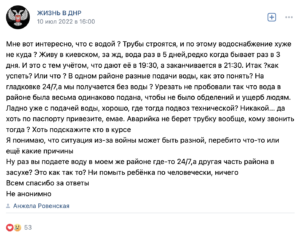 I wonder what’s going on with water? Pipes are being built, so why is the water supply worse than ever? I live in Kyivskyi district, behind the railway station. We have water once every five days, rarely once every three days. And that’s considering it is switched on at 7:30PM and off at 9:30PM. So? How can we do it, or what? In the same district the water is supplied differently. How is it possible? In Gladkovka they have it 24/7, and we are left without water? Have you not tried cutting it in a way that would leave everyone with the same amount of water, so no one’s deprived? Okay, if not for water supply, where’s the supply of technical water? There’s none. At least give it with a passport! The emergency number isn’t picking up, who are we meant to call?

I understand the situation might be different due to war, if something is broken, or for other reasons. But if you are supplying 24/7 water somewhere in my own district, while the other part has a draught? How’s that? Can’t wash my child, can’t do anything properly. Thank you for the answers. Not anonymous.