Life in DPR as told by Donbas residents

The Russian invasion of Ukraine brings suffering to millions of Ukrainians, not only those living in the central, southern and western parts of the country, but also to people in Donbas. Searching Russian social media you may come across pages where residents of Donetsk and Luhansk express their discontent with many aspects of the war. Below are several examples taken from the “LIFE IN DPR” VK.com page where users can send anonymous messages and talk about their experience and concerns regarding the on-going situation. These messages are predominantly negative in their assessment of the effect of the current conflict on lives of regular citizens.

This user wonders why so little preparation went into the mobilisation process which surely must have been planned in advance given the scale of the special operation: 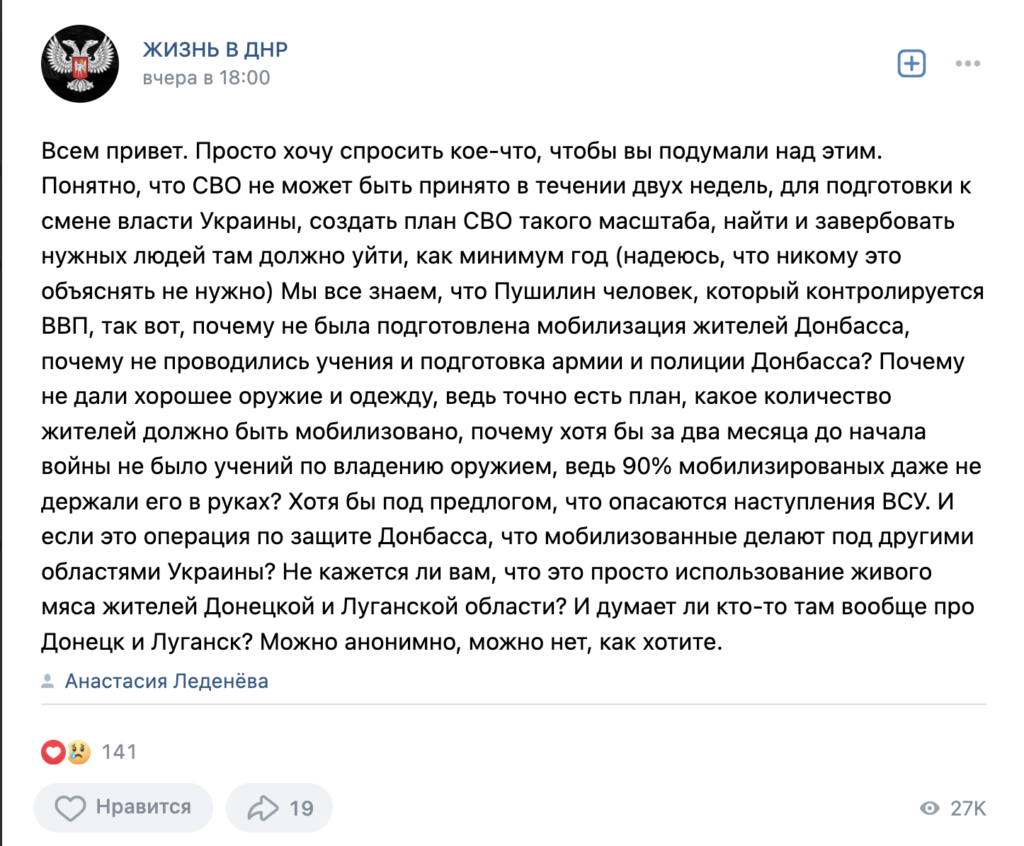 Hi everyone. I just wanted to ask something, for you to think about. Understandably, the Special Operation cannot be decided in two weeks. To prepare to change the authority in Ukraine, to plan a Special Operation of such a scale, to find and recruit necessary people, you need at least a year (I hope no one needs further explanation of this). We all know that Pushilin *DPR head* is a person who is controlled by Putin, right? So, why the mobilisation of Donbas residents was not planned in advance, why was there no training and preparation of the Donbas army and police? Why no decent weapons and clothes were distributed, since there must have been a plan of how many residents exactly will be mobilised? Why at least two months before start of the war there was no weapon training, given that 90% of the mobilised never held a weapon in their arms? At least with a pretext that they are afraid of UAF advance? And if this is an operation for defence of Donbas, what is happening with the mobilised in other regions of Ukraine? Do you not think this was a simple use of residents of Donetsk and Luhansk Oblasts as cannon fodder? Is anyone thinking at all about Donetsk and Luhansk? Post anonymously or not, up to you.

Here users react to the news that mobile showers were installed in “liberated” Mariupol while residents of Donetsk have had no proper access to water for over three months by now, asking to install the same showers in the centre of Donetsk: 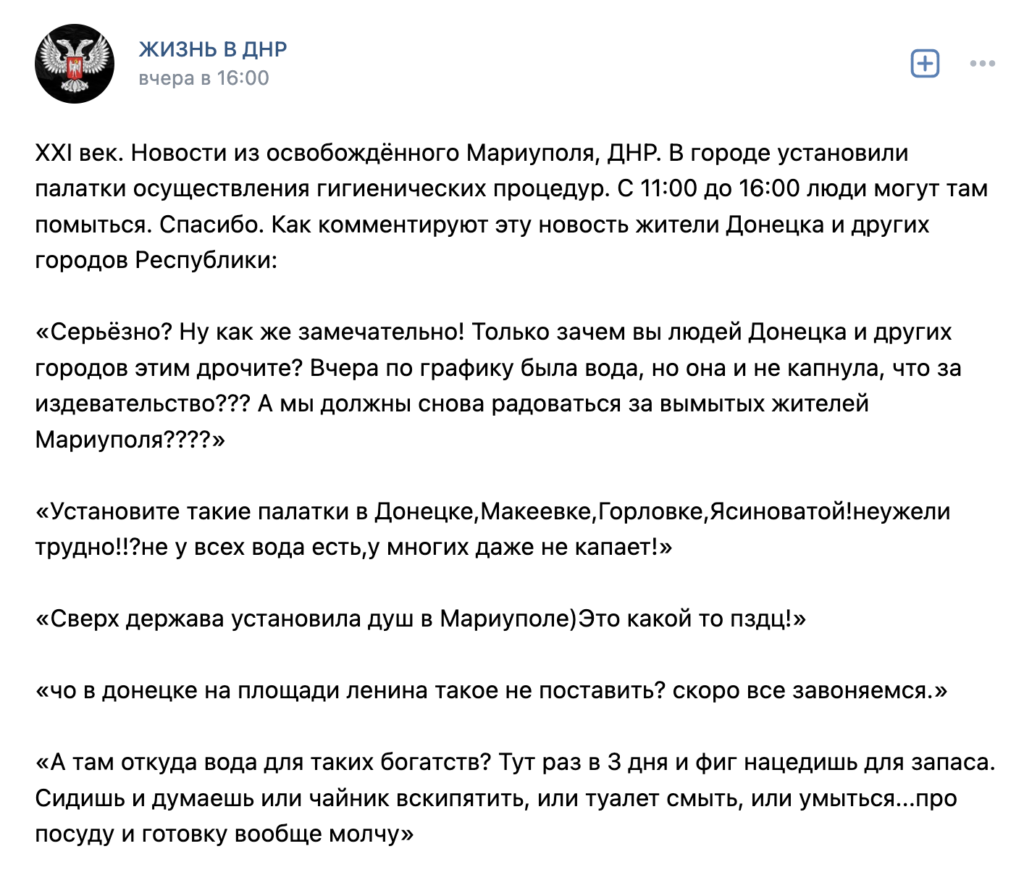 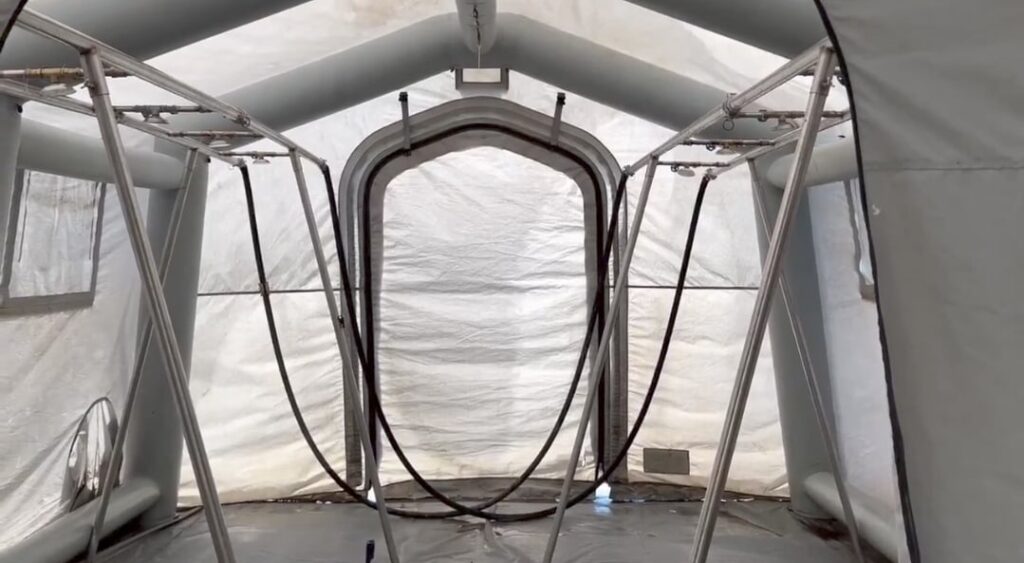 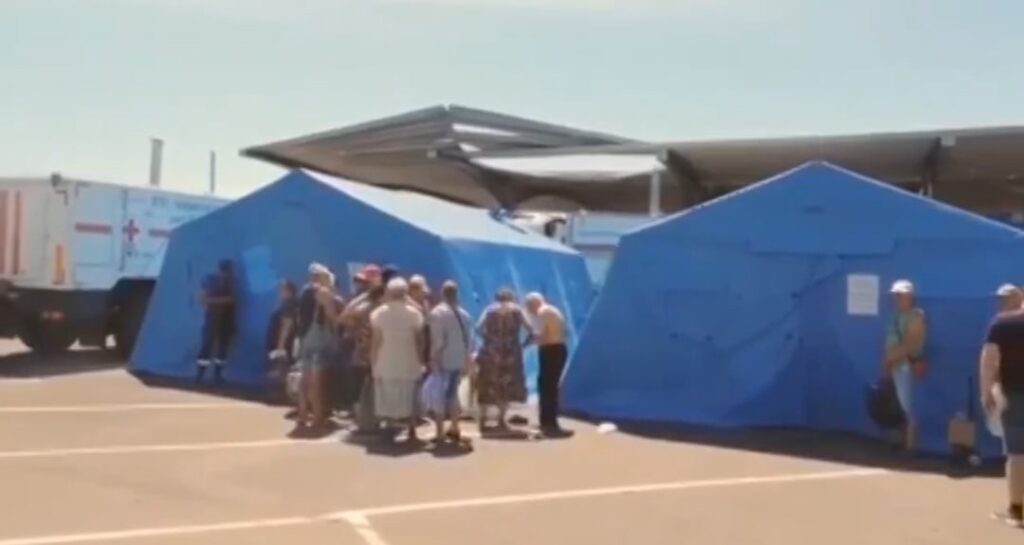 21 century. News from the liberated Mariupol. City installed tents for hygienic procedures. Between 11AM and 4PM people can take a shower there. Thank you. What do residents of Donetsk and other cities of Donbas say about this:

“Seriously? That’s so great! Yet why tell this to the people in Donbas and other cities?! Yesterday we were scheduled to have water, but it never came, what kind of mockery is that? Are we meant to be happy for the clean residents of Mariupol?!”

“Set up these tents in Donetsk, Makeevka, Horlivka, Yasinovataya! Is it really that hard?! Not everyone has water, some have none!”

“The superpower installed a shower in Mariupol! What the f*ck is this?!”

“Why can’t this be installed in Donetsk on Lenin’s square? We all going to be stinking soon”

“Where did they get water for such luxuries? It comes here once every 3 days and you can barely keep any for reserves! You have to think whether to use the kettle, or flush the toilet, or wash yourself… I’m not even talking about washing dishes or cooking…”

Some even doubt the whole idea of the special operation and the need to mobilise and fight given how poorly the mobilised forces were treated, and used as cannon fodder: 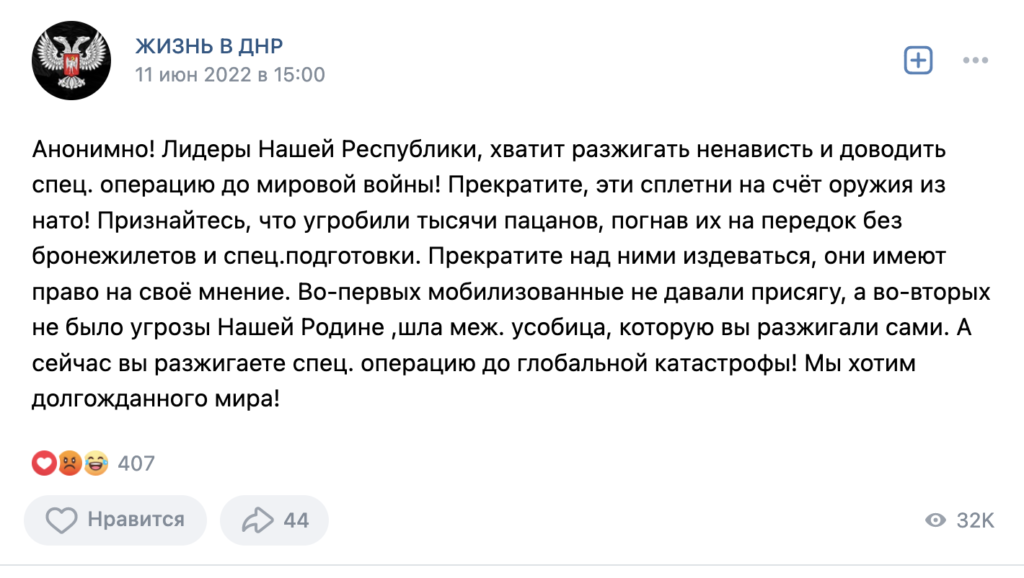 Anonymously! Leaders of our Republic, stop inciting hatred and taking the special operation to the World War! Stop this gossip about weapons from NATO! Admit that you’ve killed thousands of boys by forcing them to the frontline without armoured vests and special training! Stop torturing them, they have a right for their own opinion. First, the mobilised never took the oath, and secondly there was no threat to Our Motherland, there was an internal conflict which you ignited yourself! And now you are igniting the special operation to the scale of a global catastrophe! We want the long-awaited peace!

Perhaps the most tragic element of the on-going conflict comes from the fact that no one will bring back the thousands of workers who are needlessly dying on the battlefield – there will be no one to operate the sophisticated machinery that the region is famous for if so many die or return crippled or ridden with psychological issues, as this user mentions: 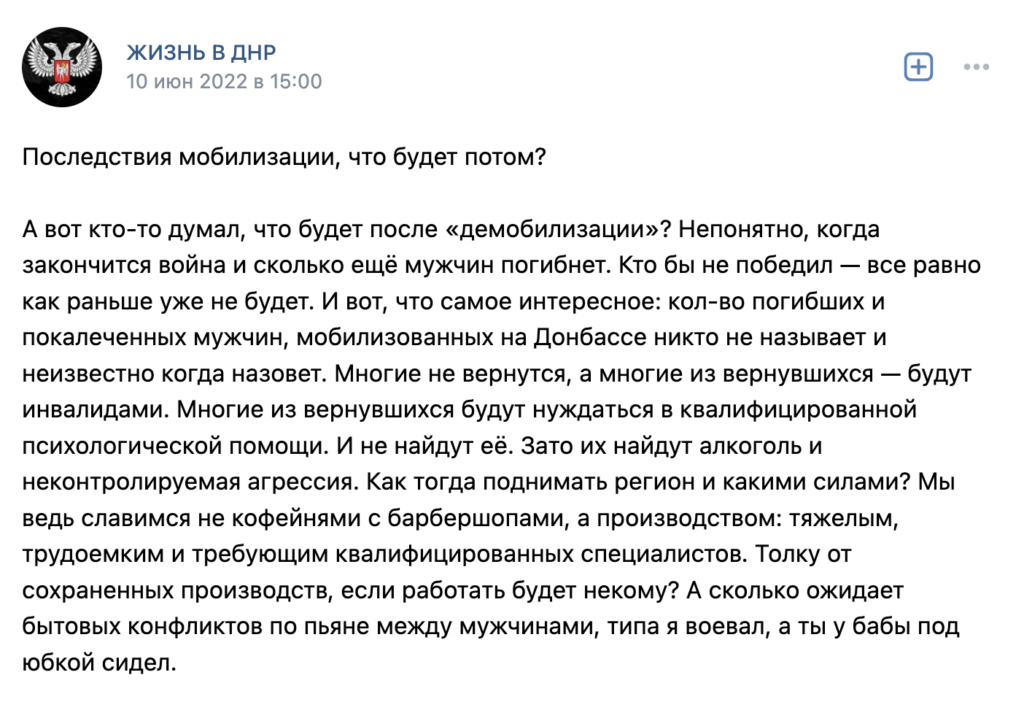 Consequences of the mobilisation, what will happen next?

Has anyone thought what would happen after the “de-mobilisation”? It’s unclear when the war will end and how many men will die. Whoever wins – it will never be the same as before. The most interesting thing – no one is naming the number of dead and crippled men mobilised in Donbas, and no one knows when they will be named. Many will not return, and many of those who will, they will be disabled. Many of the returned will require quality psychological assistance. And they won’t find it. But they will find alcohol and uncontrolled aggression. How will they raise the region then, with what means? After all, we are not famous for our cafes and barbershops, but for production – heavy, labour-intensive, requiring qualified specialists. What’s the point of the preserved production if there is no one to work? And how many domestic drunk conflicts are expected between men, who will say – I was fighting, while you were under a woman’s skirt?

What is the point of the special operation to defend Donbas if the situation deteriorated to even worse conditions than before the war? Donbas residents feel abandoned despite understanding the role they had to play in the conflict:

…all sensible people understand it was necessary to eliminate this threat *artillery* at the early stages of the special operation! Yet someone decided that Donbas can wait patiently. What the hell?! We deserve a decent life, too! We’ve been isolated for eight years, lived with escalated hostilities, and generally lived in a limbo!

People hoped that after our recognition we simply won’t be touched considering the deployment of Russian Armed forces! And then this disaster began! How could they do this to us?! We played our role we were assigned in full. It’s necessary to at least somewhat care about our people and children… At the same time, the men were taken away, those who did not flee or hide, and taken to other directions. Meanwhile, their houses are shelled by the enemy artillery and no one is suppressing it!

One can only hope these people will have peace one day. Millions of crippled souls and bodies just so that one sick dwarf could remain a king for as long as possible.