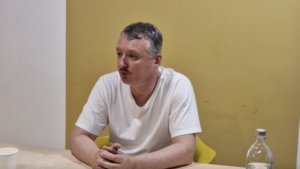 Igor Girkin comes out with another overview of the situation in Donbas and predicts an upcoming “battle for the initiative” to decide who will be defending and attacking. Mentions a Ukrainian strike group in Kherson direction which is now prepared for the advance, the only question is – when?

Just in a week or two, the battle for the initiative will commence. In military lingo this means *to decide* who will be advancing, and who will be defending. Who can put pressure, attack. Prior to that, we were attacking. We practically smashed our foreheads in Donbas at the strongpoints of the adversary. Naturally, the enemy preserved their reserves, they did not fight for every meter. Yet now they are fighting literally for every meter trying to stop us, especially since now they… after our troops broke through the first line of defence which went on the Rubizhne – Severodonetsk – Popasna – Svetlodarsk line, and then to Avdiivka. We first bit a piece of Rubizhne – I emphasise “bit”, then broke through the frontline at Popasna. They started withdrawing troops where a “cauldron” could have formed. They’ve prepared Lysychansk and Severodonetsk for a circle defence, in addition to the fact that they didn’t want to leave the reinforced Zolotoye area which is also comfortable. They are holding on to this area and don’t want to give it up, fighting for it fiercely, even at the danger of an encirclement. We are trying to cut them off, in fact we don’t even need to go too far there, we need to get through to Siverskyi Donetsk and cut off that whole group… But we are unable to do it.

Ukrainians are leaning on Bakhmut and Soledar, which is the second line of their defence they started constructing back in 2015, and never stopped. They continue building field fortifications. Therefore, by leaning on these fortifications they are counting on stopping and exhausting us. The Donetsk infantry is 70% gone, at least the professionals, they are constantly reinforced… The mobilisation started again, but… We *Russians* also have large losses, I won’t be saying how large. This way they locked our main forces in a battle for Donbas. If I was them, I would keep saving up a part of the forces the same way they are saving them up now, I would have created a couple of strike groups, and I would have attacked now, right around mid-June, perhaps at the end – I don’t know how prepared they are, what cohesion they have.

On the other hand, if I was our generals, after realising that defeating the Donbas group is not working, I would have continued attempts to encircle Lysychansk to at least cut off part of the group that is located there and destroy it. Meanwhile I would have saved up some troops also and prepared a strike in a less reinforced area. So I’m waiting for a battle for the initiative. Either we start advancing somewhere with fresh forces that are urgently being formed, or it will be Ukraine who already created a strike group. They’ve definitely created it in Kherson, near Mykolaiv. There is data that they have everything ready for an advance. Can we hold it, it’s a big question, since defending there (and Ukrainians know it very well) are the same Donetsk militias, the “mobiki”, who have f*ck all equipment. The same “mobiki” were defending at Kharkiv – Ukrainians attacked with fairly small forces and forced them to the border. We had to deploy from reserves professional Russian BTGs to at least prevent the enemy from reaching the border at its full length. The same situation is in Kherson. If I was Ukrainians I would have attacked. So I’m waiting for them to attack. Either at Kherson or Kryvyi Rih. Maybe they’ll strike sooner, maybe later. Maybe tomorrow. Maybe in a month. But it’s definitely happening.