On 14 April a Russian Dmitry Shkrebec lost his 20-year old son on ‘Moskva’ cruiser. Since then, he has been very active on social media exposing Russian command/govt. Let’s have a look at his messages just in the last two days.

On the general state of affairs 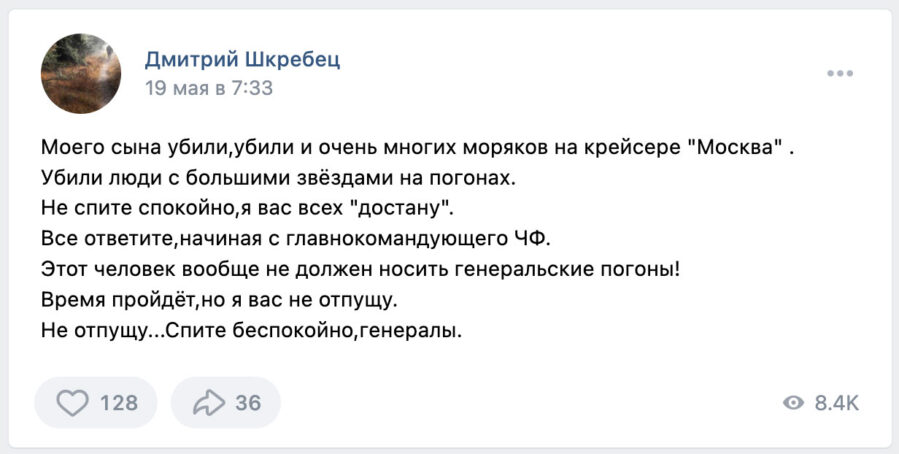 My son was killed, and many other sailors at ‘Moskva’ cruiser were killed.
They were killed by people with huge stars on their chevrons.
Don’t sleep tight, I’ll ‘get’ all of you
You will answer, starting from the Black Sea Fleet commander-in-chief.
This person should not be wearing general’s chevrons at all!
The time will pass, but I won’t let you go.
I won’t let you, go… don’t sleep tight, generals.

On the state of the ship 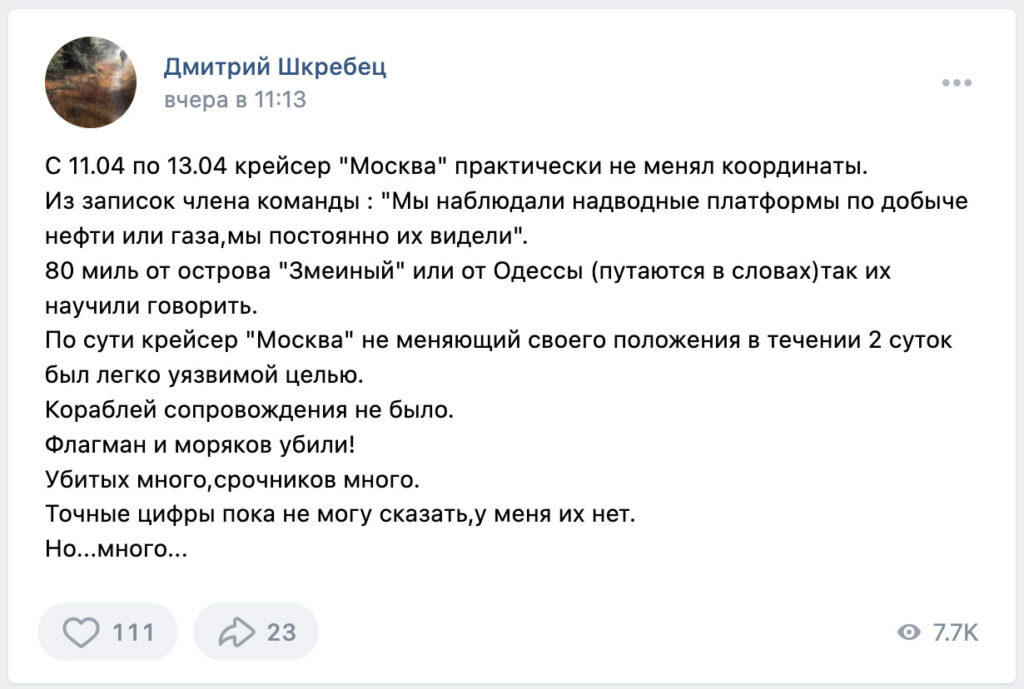 Between 11.04 and 13.04 ‘Moskva’ cruiser almost did not change its coordinates.
From crew member’s notes: ‘We observed surface platforms for oil or gas production, we saw them continuously’.
80 miles from Snake Island or Odesa (they confuse words), that’s how they were taught to speak.
In essence ‘Moskva’ cruiser was a vulnerable target without changing its position for two days.
There were no escort vessels.
The flagship and the sailors were murdered!
Many were murdered, many conscripts.
I can’t say exact numbers yet, I don’t have them.
But… it’s a lot… 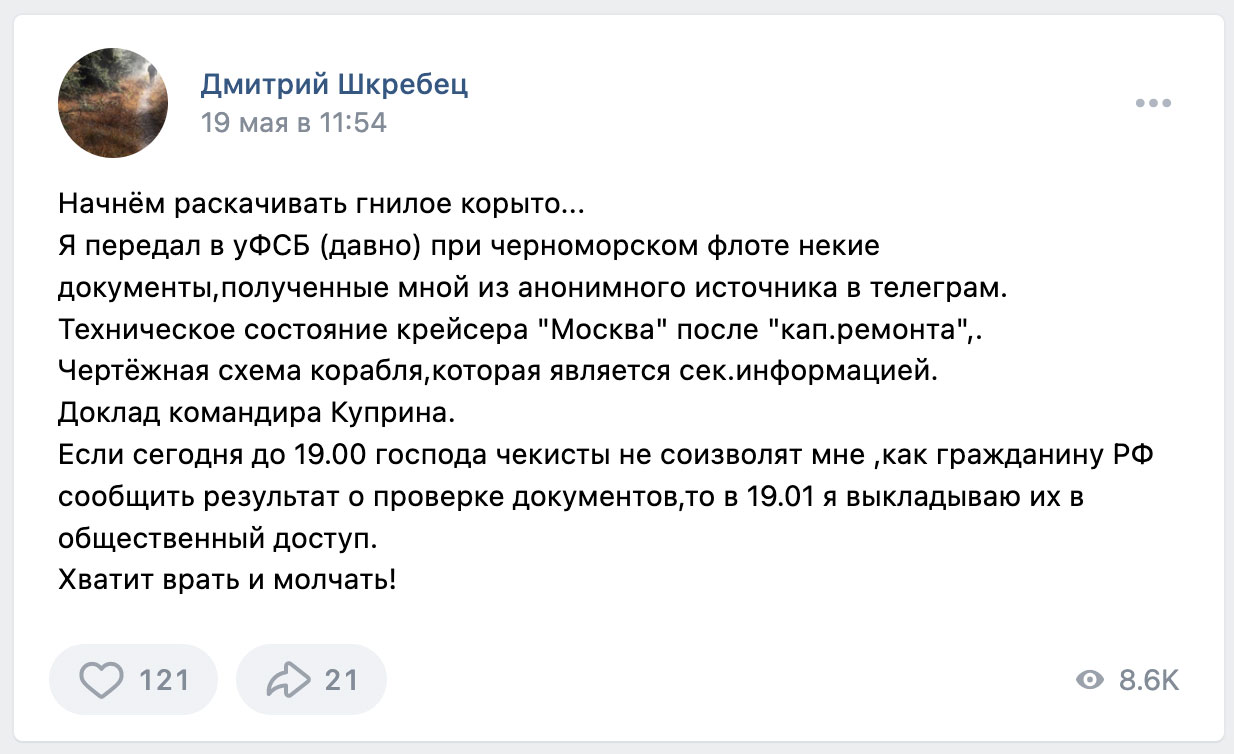 Let’s start rocking the rotten through…
I passed to Black Sea Fleet FSB (a while ago) certain documents I received from an anonymous source on Telegram.
It’s about technical state of ‘Moskva’ cruiser after the ‘major overhaul’.
Ship’s design blueprint which is secret information.
A report by commander Kuprin.
If today by 7pm the comrades Chekists refuse to report to me, as a citizen of RF, the results of the document inspection, then on 19.01 I’ll publish them.
Stop lying, and stop being silent!

On the rescue mission 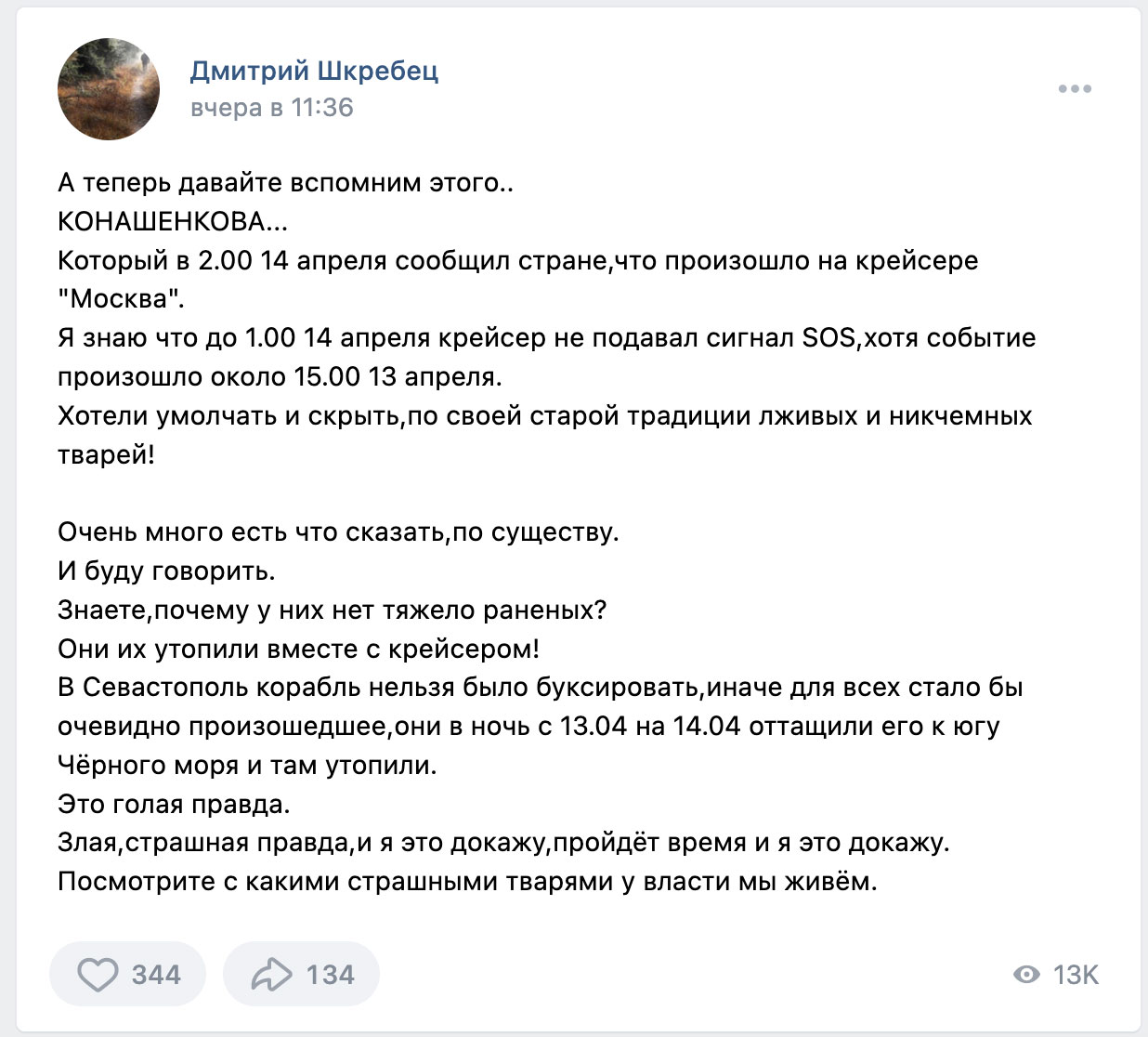 And now let’s remember that…
KONASHENKOV…
Who at 2pm on 14 April told the country what happened on ‘Moskva’ cruiser.
I know that before 1pm on 14 April the cruisers did not send SOS signal although the event occurred around 3pm on 13 April.
You wanted to pass it over with silence, and hide it, according to your old tradition of lying and useless scumbags!

There is a lot to say, with substance.
And I will speak.
Do you know why there are no seriously wounded?
They drowned them, together with the cruiser!
The ship could not be towed to Sevastopol, otherwise what happened would become obvious to everyone, they towed it to the south of the Black Sea during the night from 13.04 to 14.04 and sank it there.
This is the naked truth.
Angry, terrifying truth, and I will prove it, the time will come and I’ll prove it.
See what sort of horrific scumbags in power we are living with.

There were no rescue operations conducted in the first minutes after the catastrophe, the officers saved themselves like rats.
They abandoned the sailors in the galley! 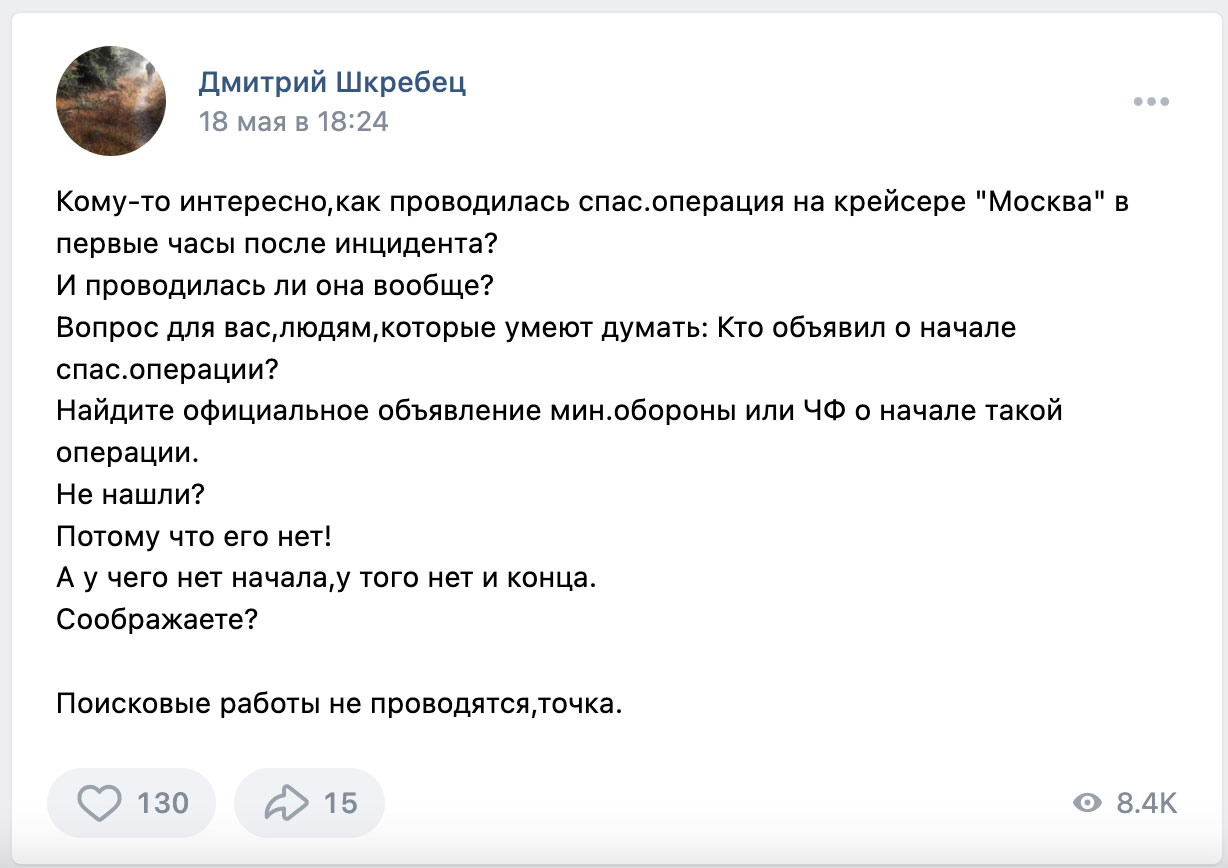 Is anyone curious, how the rescue mission was carried out on the ‘Moskva’ cruiser in the first hours after the incident?
Was it carried out at all?
The question for the people who can think: Who announced the beginning of a rescue mission?
Find the official announcement by the MoD or the Black Sea Fleet regarding the start of such mission.
You can’t find it?
Because it doesn’t exist!
And what doesn’t exist, has no end!
Do you understand?

Appeals to the president putin 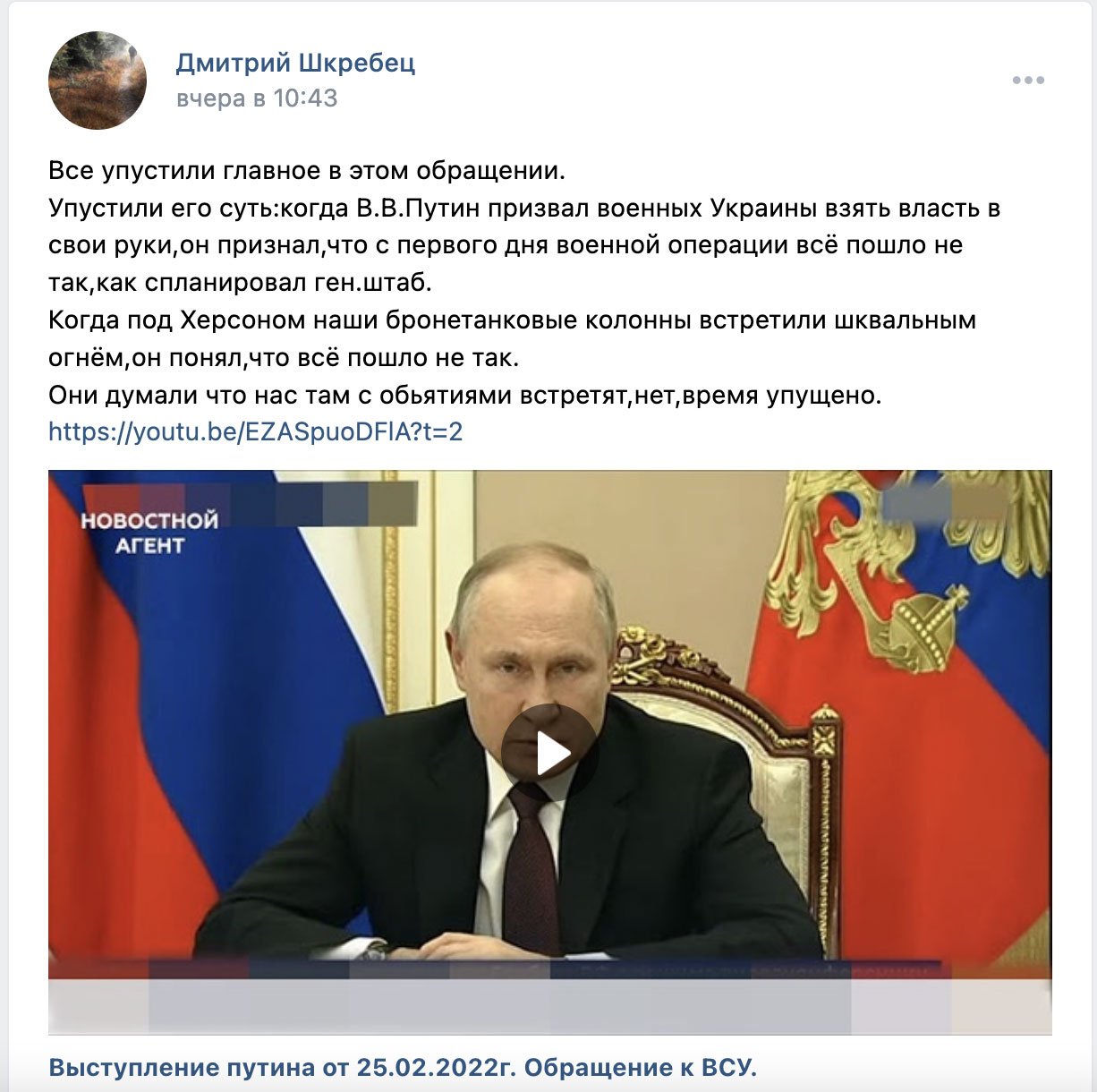 You missed the main thing in this address.
You missed its essence: when Putin called for Ukrainian military to take power in their own hands, he admitted that from the first day of the operation everything went not the way the general staff had planned.
When in Kherson our armoured columns were met by heavy fire, he realised things went wrong.
They thought we’d be met with hugs, no, the time is lost now.

I would like to hear the president regarding the loss of the flagship.
You need to speak, don’t lie to your country! I voted for you.
Be a man, speak honestly.
Why did conscripts die?

Stop lying! The holders of powers!
Russia is occupied by lying scavengers, not letting honest people say a word.
It’s hard to breathe in my country, they are suffocating us, scumbags.

Vladimir, I won’t forgive you the death of my son and many other guys!
The loss of ‘Moskva’ cruiser is your personal defeat! 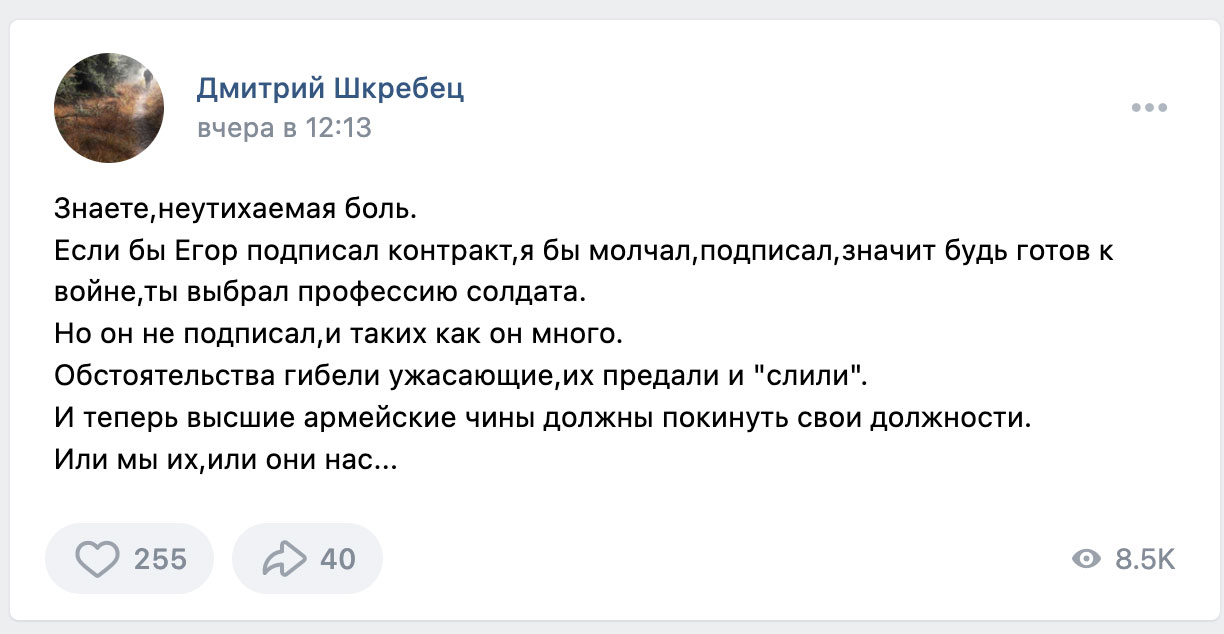 You know, the pain is unrelenting.
If Egor signed the contract, I would be silent. If signed – be ready for war, you chose the profession of a soldier.
But he did not sign, and there are many like that.
The circumstances of the death are terrifying, they were betrayed and ‘dumped’.
And now the highest army ranks must leave their positions.
It’s them, or us…

Murdered the sailors of the ‘Kursk’ submarine, murdered on ‘Moskva’ cruiser!
How long will these dogs be tormenting us?

We need changes!
In power are the people who have no honour or shame!
We don’t need revolutions, we need truth!

Everything is treacherously dishonest!
I want your children to live in Ukraine, I don’t want you to lose them.
I want this terrible war to end.

We shouldn’t have entered Ukraine, now I realise it.
This was a wrong decision.
It was a tragic mistake.
Collapse of diplomacy.

There is no more special operation. There is war.
And no children are ‘someone else’s’ for me.
This murder needs to be stopped!

Took away the closest person to me.
Murdered him, I won’t forgive it to you!