Artillery shelling almost every day, no risk of attacks. Some 🇺🇦 counter-artillery work.

🇷🇺 sources panicking about Lyman getting encircled. According to their reports 🇺🇦 has reached Ridkodub and Korovii Yar. For actual encirclement 🇺🇦 would need to reach Novoliubivka. Everything should be ok in couple of days. Rumors of 🇺🇦 winning.

🇷🇺 has created local artillery advantage, this is the only direction where 🇷🇺 keeps attacking. They can only do that in 30km wide area out of 1300km front-line.

5-6 shellings per day, nothing significant. 🇷🇺 has relocated forces to Bakhmut and Lyman

only artillery and aviation shelling, no movements.

Kadyrovytes arrived, but their building got bombed, 40+ destroyed, 30 hospitalized. 🇺🇦 continues to bomb and weaken 🇷🇺 forces in area.

From videos, it appears average age of mobilized is over 40. Younger men without children, loans do have more options to escape. Older men might have dream of restoring USSR, more inertia.

If mobilized solders are well prepared, they can replenish regular units who have core personnel remaining, making situation unpleasant for 🇺🇦.
Right now they are not ready, sending them to battle without motivation, preparations, integrating subdivisions will have near-zero value. Full integration from unit to brigade would take at least 2-3 months.

Capacity of 🇷🇺 training grounds is 60-90k. Not everyone will go to battle units, part are needed in repairs, supplies, rear. First wave would fill in existing subdivisions, next wave would need to create new subdivisions, that needs equipment. 🇷🇺 has used up 60% of their stored equipment, it’s partially broken. Such limited subdivisions could only be used in 2nd echelon, at some directions. Estimating 🇷🇺 could create some 30-35 BTGs this way, adding some 30% to current 107 BTGs in 🇺🇦.

It is extremely hard to prepare subdivisions, even when you have full assistance. To do so, while there are sabotages, lack of time, equipment, ammo is really hard challenge. 🇺🇦 has seen some non-prepared units, that were expected to “Learn in battle”, in week they got 30% causalities.

Anyone ready to protest, should go to Crimea. If anything happens, 🇺🇸 would destroy Black sea fleet, based in Crimea, thus eliminating 🇷🇺 military presence. Crimean Tatars and Ukrainians could be in assistance . Guarding few entry points is much easier than anything in mainland. Anyone who couldn’t escape, should go to Crimea.

A battalion of 400 armed and hungry men can easily rebel against superiors. 🇺🇦 officially states, that it will not fire at rebelling 🇷🇺 units. If there would be attempts to suppress rebellion, 🇺🇦 would assist with firepower.

For 150k solders inclined for rebellion, you would need about 20k of barrier troops, to keep everyone afraid. Kadyrov and Rosguardyia won’t be able to provide that much.

Exchange had huge work with Secret services of multiple countries involved, several 🇺🇦 ministries. There couldn’t be worse blow on mobilization, than giving away Azov solders on same day. Three versions:
1) Putin is not controlling 🇷🇺 anymore. Unknown if he is even alive.
2) Putin is simultaneously 🇨🇳 Chinese and 🇺🇸 spy
3) Putin asked 🇹🇷 Erdogan for assisting with peace negotiations, and was asked to prove, he can be trusted.

Before exchange, Medvedchuk told everything. Huge amount of agent networks were discovered. Questions asked by Feygin were answered too.

Protests should happen near district administrations, blocking them, every day at 19:00. Everything is frightening, until you have decided to kick out first door.
After that, collapse of power is imminent. Multiple districts, and Rosguardia can’t do anything. Whole world is watching at you, we support you. 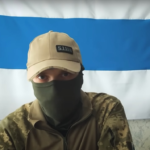