Most interesting area is Kupiansk-Svatove. 🇷🇺 forces from Borova to Lyman are left as screen, to build 2nd (and 3rd) line of defenses at Troitske-Pokrovske-Nyzhnia Duvanka-Svatove-Kreminna. Breaking that, would allow 🇺🇦 to control half of Luhansk district and immediately reach Rubizhne/Schastia/Luhasnk/Sievierodonetsk/Lysychansk cities. 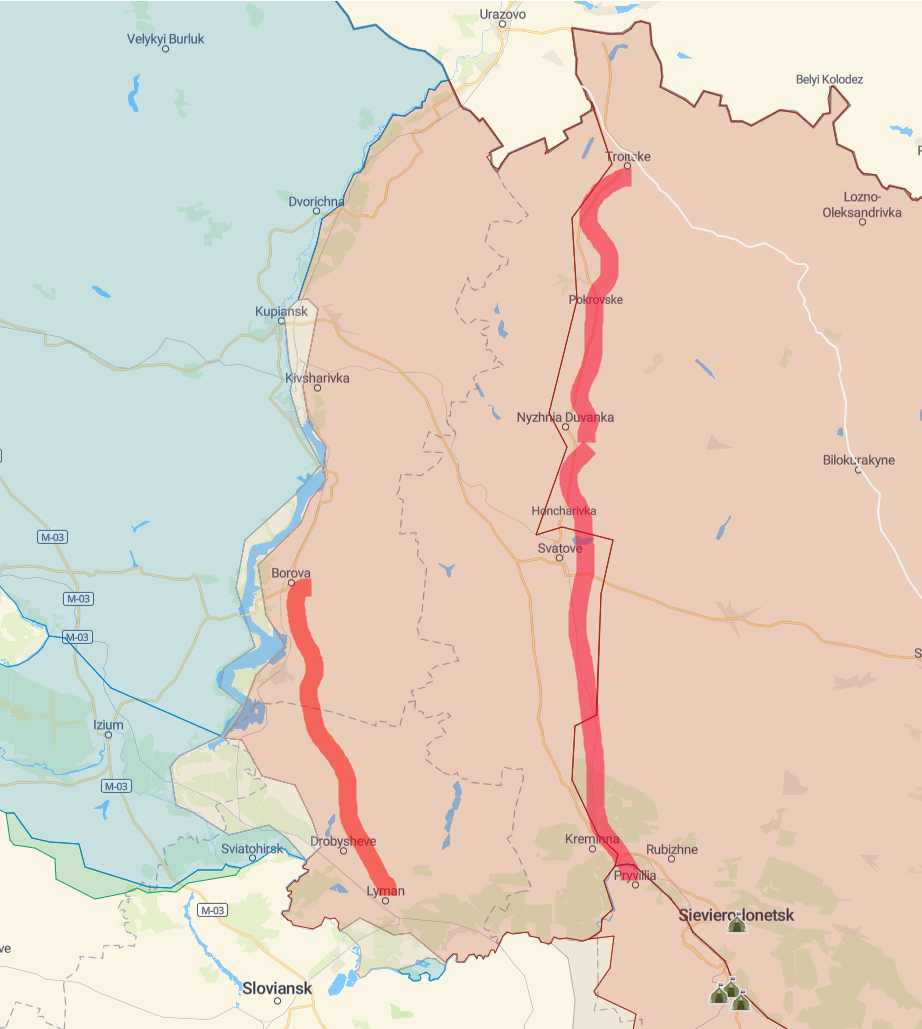 🇺🇦 forces still haven’t got past Lyman and Borove, where 3 🇷🇺 BTGs are defening on complicated terrain (forests, rails, roads, irrigation structures).
There are 3 scenarios:
1) 🇺🇦 breaks first line, has enough potential to advance on Svatove, wins that, and advances on Kreminna. This opens up all north of LNR, allows to cut off DNR. 🇷🇺 is very afraid of this, trying to set up all possible defenses.
2) 🇺🇦 gets stuck in Lyman, stuck or lose footholds near Kupiansk and Borova, doesn’t have enough forces to continue. It will take time to accumulate reserves.
3) 🇺🇦 pressures more on south – at Spirne, Verkhnokamianka, Bilohorivka. If 🇺🇦 captures Lysychansk-Sievierodonetsk from south, it totally bypasses newly created defensive line.

It’s the only part of front-line, where 🇷🇺 is attacking in some 20-30km wide zone. 🇺🇦 is doing active defense, and wearing out 🇷🇺 forces from Bakhmut to Marinka.

another attack on water reservoir, 🇷🇺 attempting to wash away any pontoon bridges, to complicate 🇺🇦 foothold across Ingulets river. Water takes about day to reach. This creates lack of drinkable water, another war crime.

🇧🇾 Belarus upgraded 🇨🇳 China status to “Strategic partner”, which even 🇷🇺 doesn’t have.
🇰🇿 Kazakhstan got security guarantees from 🇨🇳, and is leaving CSTO.
🇷🇺 losing it’s influence in central Asia, being replaced by 🇨🇳 and 🇹🇷 Turkey

Seems dead, conflict also between members 🇰🇬Kyrgyzya and 🇹🇯 Tajikistan. Clans have grown in 🇦🇲 Armenia, that want to use 🇷🇺 money, instead of negotiating with neighbors.

Possibly 🇪🇺 will not allow to destroy Putin completely, to use him against 🇨🇳China. However 🇪🇺 is getting smarter – 🇩🇪 nationalized 🇷🇺 owned energy company working, that was largest source for corrupting 🇩🇪 politicians. Hopefully those processes will happen faster, than somebody decides to allow Putin to survive.

Over 440 graves found so far, including children and tortured solders. It’s not understandable how West can even consider negotiations or perspective to “save face”.

Putin said that “not all army is involved”, yet units from Kuril islands are in 🇺🇦 and Prigozhin is recruiting criminals for Wagner. Wagner is mostly sent to Donetsk front-line (Bakhmut, Spirne, Lyman), in attempts to reach Donetsk district borders, so that war could have political end from 🇷🇺 perspective. Two Kadyrov regiments are gathered from retired VDV members with 🇷🇺 nationality, and supposedly already in 🇺🇦.