in Arestovych Broadcasts
|
by WarTranslated

Summary of the daily livestream with Aleksey Arestovych, kindly brought to you by Stepan: https://twitter.com/childsacrifice1

There has been an increase in Russian attacks all over the front following a “regrouping”. All of these have failed with no exceptions. Feigyn brings up a map showing that there has been no substantial Russian advance over the last month and in some places the Russians have even been forced to retreat. 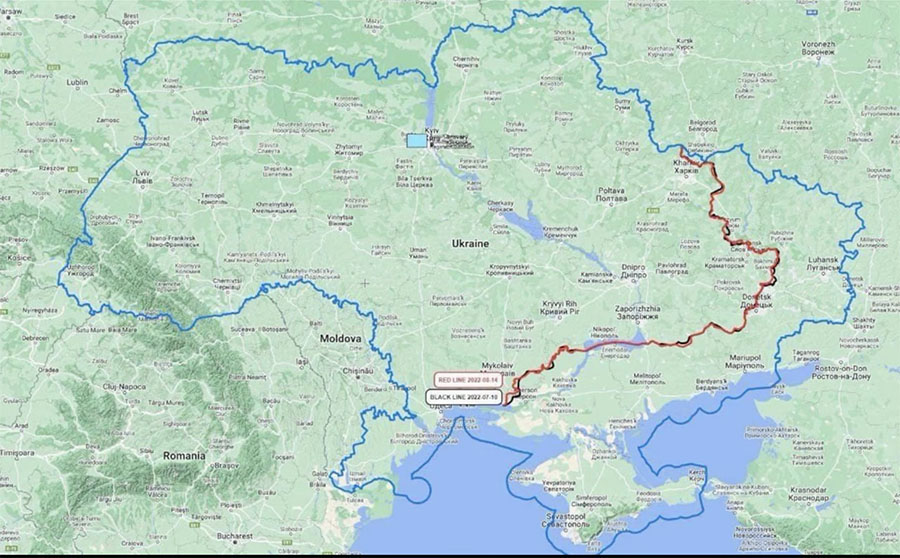 Russians have claimed that the explosion in Dzhankoi was the result of Crimean partisan activity. Arestovych says that Dzhankoi was shelled and this hit a collection of artillery systems gathered there including Pions and MSTAs and an ammo depot. Railway traffic was delayed, but the damage was repaired quickly.

Hvardiis’ke was hit by something a few hours later, 1 su24 confirmed destroyed, possibly several more su24 and su25s are damaged. In addition to this, ammo detonated. Podoljak [presidential advisor] said that the Crimean bridge is a legitimate target. The Russians simply have no way to answer for these hits. All Russian heavy weapons except nuclear has already been employed in this war.

Zelensky is meeting Guterres and Erdogan in Lviv tomorrow. Arestovych believes this meeting is about grain.

Zelensky’s article in the Washington post. Arestovych believes that much of the criticism about Zelensky not reacting to warnings is an example of the benefit of hindsight. Arestovych was not in the administration for the 1 and a half months leading up to the war.

Arestovych says that the Kherson direction was identified as the most dangerous direction pre war and exercises were carried out there, but a combination of favourable open terrain for attacking and “mass betrayal” of government officials in that area led to what happened. However there were battles, Arestovych mentions the 59th motorised brigade. A whole battalion of Ukrainian marines was fully destroyed in Chonhar, and infamously a marine blew himself up along with a bridge in Henichensk, but the superiority of Russian forces was “overwhelming”, and the open steppe gave them an advantage. Arestovych denies that there was a rout and claims that intense battles took place. Arestovych says that he has “personal questions” about the handling of the group of Russian forces that went east to Mariupol from Crimea but he will not disclose these.

Arestovych says that the Ukrainian administration knew about the invasion plans but simply could not believe it because it was “insane” to attack on 9 directions at once, and this assessment has proven to be correct. Arestovych says that if the Russians only attacked in the east, they could have encircled and destroyed the whole grouping of Ukrainian troops there (50-60k dead captured and wounded).

Discussion of pre-war preparations in Ukraine

As well as this, no meaningful western help would have arrived because this would have simply been a continuation of the Donbass conflict. Arestovych says that the Ukrainian ministry of defence begged for weapons from the west since late October, but in late November the US would not even give Ukraine Stinger MANPADS. Arestovych said that a Ukrainian government representative visiting Washington on the 22nd of February was “given farewells as if he was a terminally ill patient”, and that the US fully believed that Ukraine would fall. The estimate was that resistance would cease in Ukraine after 72 hours. Arestovych says that yes, the Americans warned us, but instead of giving us any form of aid, economic or military, they gave us 72 hours. The Europeans were even worse, they did not even say “farewell” as the Americans did.

According to Arestovych, the date of invasion was changed 5 times in a time frame of 2 months. Arestovych says that if Ukraine reacted and carried out a mobilisation, training and spent lots of money doing this, then when an invasion would not have taken place, Zelensky would have been ridiculed and people would have stopped believing in the possibility of a war. Arestovych notes the economic cost of mobilisation and war, and says that the war is costing Ukraine $9 billion a month. If Ukraine would have mobilised into a defensive posture, the Russians would have simply waited for a more opportune time to attack. Arestovych also mentions COVID as a factor against staying mobilised for a prolonged period of time. Eventually, some time in mid-April, Ukraine simply could not financially and physically stay mobilised any longer, and the Russians would have struck when the reservists were disbanded and on their way back to their homes. Some people who believed that there would be a war would run to Europe and this would create transport and political chaos.

Arestovych says that many people, both in the police, army and civilian did not believe that a victory was possible, even if they claim now that it was always inevitable. However on the whole, the Ukrainian army performed a “miracle” and largely held its positions and inflicted casualties.

Arestovych admits that the Ukrainian side made mistakes. He says that he believes that more could have been done from a military perspective. More could have been done to prepare for this scenario of invasion. However, there were preparations, as a country who did not prepare for this war would not have successfully held out for 6 months. Only experts with education and experience can accurately say what should have been done, and most complainers right now are most definitely not in this camp. Therefore, Arestovych says to people who complain about these things: trust the experts. After the war commissions will be formed and the lessons will be drawn. the conclusions they draw may be very uncomfortable for the current government.

Arestovych reveals that there were C&C exercises before the invasion which were actually hidden preparation for it. He also says that the Russian government asked for negotiations on the evening of the 24th because the Ukrainian air force had avoided destruction except in 2 or places. He also says the commander in chief of the UAF, Gen. Zaluzhnyi, “a true military man”, would have prepared for war even if he was forbidden from doing so. But he was not forbidden, and instructions were given, and they were carried out.

The people will get to show their position after the war using the ballot box, but right now the public needs to consolidate around the political leadership. The Russian military-political leadership dreams of an internal loss of trust in the Ukrainian political system.

Arestovych believes that President Zelenskyi and military political leadership balanced between full mobilisation and a subsequent total loss of trust, versus not undertaking any preparations for war well. He thinks that they should have done slightly more military preparation, however he admits to personally not having access to 100% of the information, and this information could reveal that the administration was right to take the steps it did. A post war commission will determine who was right, and the people can then make their decision based on this.

Anyone who complains right now is obstructing the war effort and is either an enemy or acting like the enemy.