Vysykopillia: 🇷🇺 was having hard situation for 2 weeks, now 🇺🇦 captured Potomkyne completely and Olhyne partially. There are more than 1000 🇷🇺 paratroopers (not 2k) in ¾ tactical envelopment. Yesterday 🇷🇺 attempted to break out, but were interrupted by 🇺🇦 fire.

This is direct consequence of destroying 🇷🇺 command posts, and 🇷🇺 command being in chaos. Situation was worsening for 2 weeks, 🇷🇺 command did not react in time.

Davydiv Brid, Bilohirka, Velyka Oliksandrivka: 🇺🇦 cut one of roads going along front-line, denying 🇷🇺 ability to maneuver along front-line. There could be several more envelopments, like in Vysykolillia. 🇺🇦 army can also do tactical envelopment.

🇺🇦 will not provide corridor, but will likely offer to surrender. 1000 solders should have equipment for 2 batallions, and it’s good value for prisoner exchange.

Siversk: 🇷🇺 released fake video from near-Siversk, where showing prisoners from Lysychansk, then another video from 2014. Looks like, they don’t have any real progress to show.
Bakhmut: Small 🇷🇺 advances near Pokrovske. Some classified information shows that prognosis for 🇷🇺 is unfavorable.
Kharkiv: some attempts to attack, getting countered.
Izium: 🇷🇺 constantly attacking, no progress, looks like circus.
Svitlodarsk: 🇷🇺 attempts from Holmivsky to Svitlodarsk. Area should be carefully monitored, as 🇷🇺 are trying to create envelopment from Vidrodzhennia to Semyhiria, and from Holmivsky to Novoluhanske. This was Arestovych’s zone of responsibility in 2018.
Horlivka: Unsuccessful 🇷🇺 attempts on New York. Today there was explosion in 🇷🇺 controlled Horlivka.
Marinka, Vuhledar: for 150th day in row attempts to capture Novomykhailivka
Zaporozhye: tactical actions, nothing significant. Video of kamikaze drone destroying BM-21 Grad. Other report of wounded 🇷🇺 solders, circumstances unknown.
Nikopol: indiscriminate attacks from BM-27 Uragan for over week across Dnipro river. In response 🇺🇦 hits 🇷🇺 military in Enerhodar.

No direct agreement between 🇺🇦 and 🇷🇺. Any ships traveling to/from 🇺🇦 will be checked in 🇹🇷. Commission will include members from 🇹🇷 🇺🇦 🇷🇺 and U.N. 🇺🇦 ports remain in control if 🇺🇦 military.
Commission will provide safe routes to ships, without minesweeping.
Forbidden to approach ships from other ships/aircraft/drones/boats/etc.
If 🇷🇺 ships approach, they will be fired at. Main focus on 🇹🇷 providing assistance, in case of problems.
🇷🇺 has hopes for part sanctions being held back (aircraft parts, agriculture).
To U.N. and 🇪🇺 it is important to avoid food crisis in Africa and Middle East, thus even selling 🇷🇺 food is step in right direction.
To 🇺🇦 it’s important that there is no cease-fire, no lost control of 🇺🇦 ports.
🇷🇺 did attempt to force some agreements, but didn’t succeed.
Estimated value of exports is $1bn/month.

Control system was created at beginning of weapons supplies, now it’s being strengthened. There is no problem in tracking heavy weapons. Europol is mostly interested in small arms, that can be carried. Smear campaign to accuse 🇺🇦 of weapons smuggling has failed due to timely reaction.

Accent to hit near tactical zone at brigade level – weapons storage, comms equipment, command posts, air defense systems, artillery, after destroying operational level targets with HIMARS. After that, 🇺🇦 can make hard-to refuse offers, like at Vysykopillia.
Imagine, if each artillery piece, air defense system, command post is hit soon after being deployed – it becomes impossible to control anything, and later you even don’t have anything to attack with.

🇺🇸 Pentagon announced that 1000s of 🇷🇺 junior officers have been killed.
CNN reports that 🇷🇺 has committed 85% of it’s forces to 🇺🇦 war.
Currently 135-150k troops located in 🇺🇦, they are being rotated regularly.
All 🇷🇺 units have been in 🇺🇦, even 18th Machine Gun Artillery Division from Sakhalin, which hasn’t been used in Afghanistan or Chechnya war. 85% refers to 15% currently located in 🇷🇺, many are in rotation.
🇷🇺 started invasion with 8 out of 10 ground armies, adding 2 later, doing many rotations and mix-ups since then. Many units have lost battle capabilities (40-60%) several times, then restored with new solders.
Despite committing such great size, 🇷🇺 doesn’t have any significant progress.

Zelensky mentioned 30 🇺🇦 fatalities and 250 wounded per day [link].
Most single-day losses in Donbas region (single direction), was at end of April, 100 people/day, approx 2 or 3 times. Mostly 20-30 dead per day.
Later 🇺🇦 stopped being lucky, lack of ammo, increase of 🇷🇺 intensity, for 2 months (mid-April to beginning of July) 🇺🇦 had hard time and correspondingly heavy losses.
There have been days with 13-15 hours of uninterrupted shelling, when 🇺🇦 had no way to respond.
There is no higher military honor, than being 🇺🇦 infantry, what they do, would make any world army proud.

Some changes in 🇮🇱 government, for the better.
🇷🇺 closed Hebrew repatriation agency in Moscow.
🇮🇱 did attack on UAV factory in 🇸🇾 Damascus, possibly producing for 🇷🇺 or Hezbollah.
There have been noticeable cargo flights from 🇮🇷 Iran to 🇷🇺.

Several people had 🇺🇦 citizenship revoked, no comments from officials yet.

Photo of cat saved from Snake Island. He has found hooman. 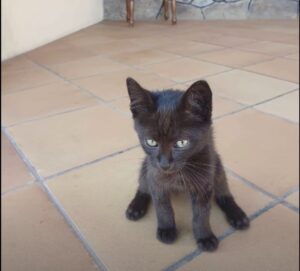