On 28 July, footage emerged of a Russian soldier performing a brutal act of torture on a Ukrainian fighter. This caused an uproar in pro-Ukrainian sources, so we looked at reactions of their Russian counterparts. Except for a few users who condemned this brutality, the majority of commentators seem to have supported what happened, or at the very least doubted the intentions of those who uploaded the video.

The pro-Russian, ex-Ukrainian politicians Dimitriyev openly condemned this footage, but as his reasoning pointed at the racial profile of the alleged perpetrators.

I couldn’t watch today’s creepy video. But here’s what I’ll tell you. This is a civil, fratricidal war in a sense. When you rejoice about the fact that a mongol cut off the genitals of a Ukrainian fighter, this means that later, after the war, your relative will not be born. Similarly, the castrated Russian fighter will not have children. So you, your family will be smaller. And there is nothing to be happy about. Who is right and who is wrong, history will judge. But when all this is over and you cannot clearly explain what you fought for, which you can’t do now either, our family will become smaller. But there will be more of Mongols, or Turks, Chechens and many others.

And you better not excuse him [perpetrator], but reach the most severe punishment for the torture. Open [punishment]. In order to somehow slow down the spiral of violence and not to set up those of us in captivity.

This comment lead to a number of responses from several military commentators, most of which were very radical in nature and slammed Dimitriyev for his “weakness”. For instance, “Za Pobedu” claims that the Ukrainian soldier was a pedophile:

I watched a video of the castration of a Ukrainian pedophile by our guys. A tough spectacle for sure. I have already been asked a couple of times for my opinion on this matter, they already say that Dimitriyev burst into tears again (I haven’t read it yet).

Back to our guys. They are morons in that they filmed it and posted this online. It’s really unnecessary. It is unlikely that this will stop the bastards in the Ukrainian army from abusing children. The human psyche is arranged in such way that each person is sure that this will not happen to them. Therefore, pedophiles will watch videos and continue to do what they were doing, thinking that they will definitely win, or they will not be captured, and if they get caught, who would find out anyway? and that’s it.

If you want to really intimidate someone, and make them think, then do not slice pedophiles, but nazis, for example. This lowers their chance of survival. The more carriers of these characteristics [genitals] are sliced, the faster and more massively panic spreads.

The intimidation of pedophiles must be dealt with within the framework of one’s own society. Only then does it make sense.
Punish quietly, like a criminal, forget, and continue to engage in war.

F*ck knows though, I find such videos a form of perversion, very unhealthy. Just an implementation of a crazy idea.

He then follows up with:

Just read Dimitriyev. This is his repertoire. You know, you listen to a person and think – what a great rag to wipe your feet.

Prizrak Novorossii with 150k+ followers quotes “Za Pobedu” and generally condemns the video, yet still calls for annihilation of “Ukronazis” in general:

This is perversion. And weakness. And too much free time.

Bullet (blade) in the medulla oblongata. And on to more important things. Or to the next item.

You just need to systematically destroy all the Ukronazis – totally. And their accomplices. Cold, calm, indifferent way. And not arrange fraternization with them, trying to show that they are “people too”, or give birth to children from them.

Some “experts” such as Andrey Medvedev with 100k+ followers doubts the whole premise of the video, hinting that it is a Ukrainian fake:

Regarding the video with “torture/castration of a captured Ukrainian”.

Anything can happen in a war. Sometimes prisoners are tortured. Not a single army in the world is exempt from this.

There are several questions about the video that is being distributed today in Telegram.
The first. Where did the Ukrainian side get the video from?
Second. Did the video by chance appear right before the planned offensive of the Ukrainian Armed Forces?
Question three. Why are the videos simultaneously dispersed by Ukrainian TG channels and Russian oppositionists? Is it a coincidence or was it planned?

The fourth question. Who is really in the video? People have no particular accent, ethnic or regional. Given the number of mercenaries from the Ukrainian side, the video could have been filmed anywhere.

Similar doubts are expressed by Rybar with 600k+ followers whose messages makes us think the has already witnessed such a torture before in his life and is now an expert, given his critique:

We watched a video circulating on the Ukrainian network about the castration of a Ukrainian pedophile by the Russian battle Buryats. There are many questions: for example, why there are no fountains of blood. Why is the “victim” behaving calmly.

And most importantly, the appearance of the necessary narrative “Putin’s battle Buryats are castrating Ukrainian lads.” Especially when the separatist organisations “Asiatics of Russia Fund”, “Free Buryatia” and “New Tuva”, created with foreign funds, are rocking in the public space.

You can try to explain everything within the framework of slandering the RF Armed Forces: the victim was injected with expired Promedol [sedative]. The castration was carried out by a professional hunter.

Evidently, the majority of the Russian commentators are putting the authenticity of the video to doubt, which is not surprising. What is shocking however is the reaction of regular Russian users to these news. Screenshots below were obtained from various Telegram channels and provided by “voynareal” Telegram page, with our translations. Judge for yourself: 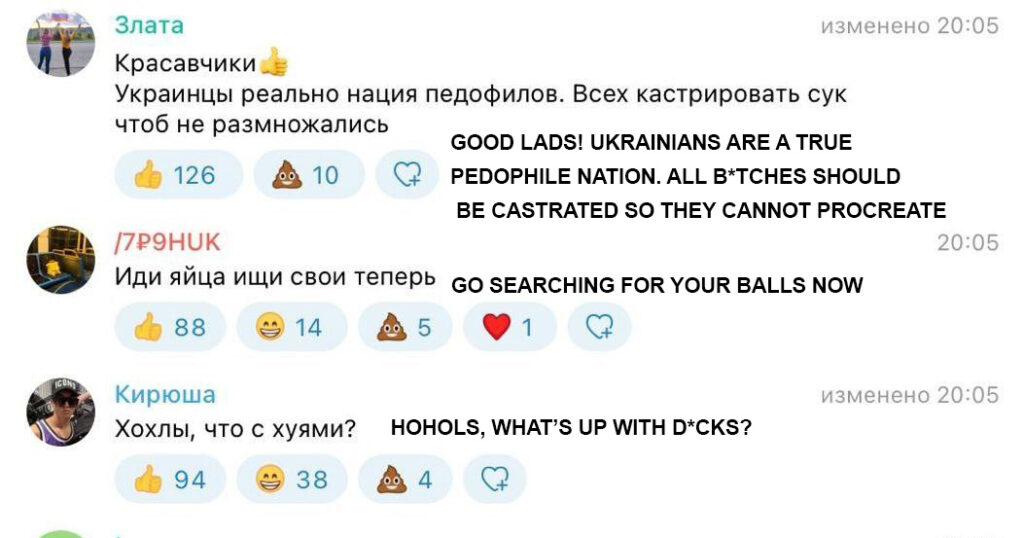 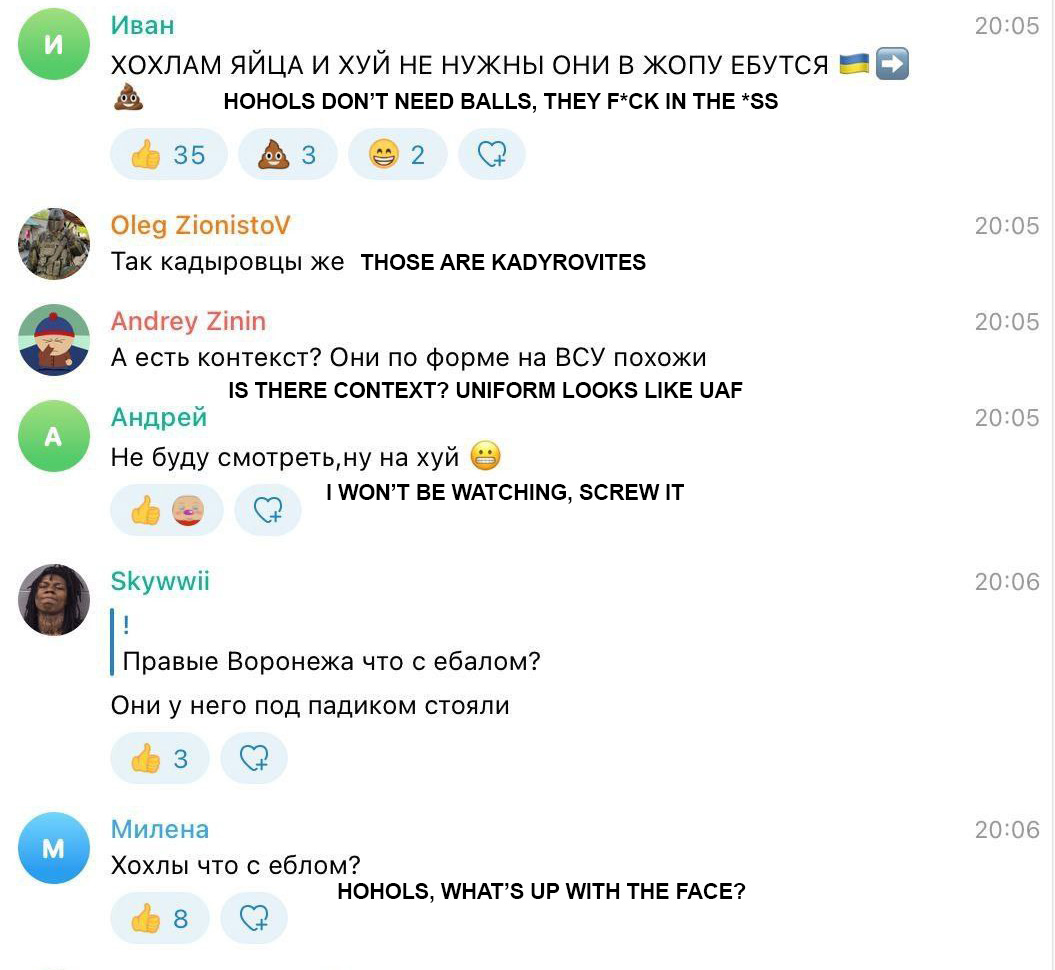 We only published a small part of the reactions. The majority were left our, but they are no less shocking.