Original article in Ukrainian on:

Now [interview recorded in April 2022] he is a fighter of the 128th Transcarpathian mountain assault brigade of the Armed Forces of Ukraine.

And Viktor Beylovich [his patronym] Troshki is an ethnic Hungarian. He did not complete his military service in the Armed Forces, did not graduate from the military department at the university, and had neither army nor combat experience. This means that he was not in the reserve or reserve and was not subject to mobilization, so he could continue to lecture students or engage in scientific activities.

However, in the very first days of the full-scale invasion of Russia, the associate professor of UzhUni voluntarily joined the Military Commissariat and became a soldier of the 128th Mountain Assault Brigade. 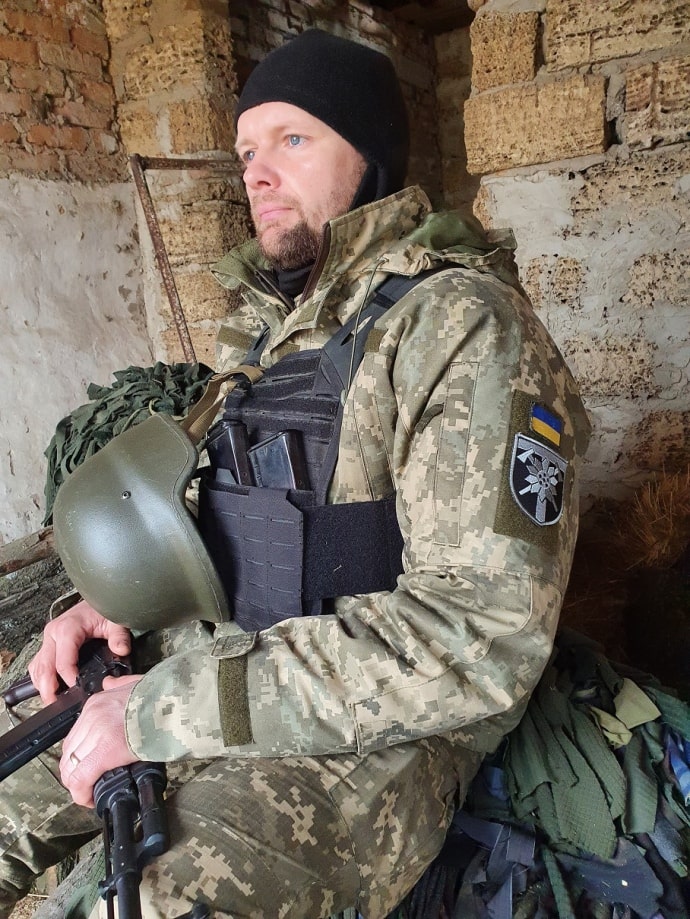 We met with Victor at the current location of the brigade unit, 1,300km from Transcarpathia. The most optimal place for the conversation turned out to be a small room that the military uses as a woodshed.

– I was born in the village of Kinchesh near Uzhhorod, – Viktor says, sitting on logs covered with a camouflage net. – Hungarian by nationality. My grandparents on my father’s side hardly spoke Ukrainian, but my parents intentionally communicated in two languages ​​at home – Hungarian and Ukrainian, so I learned both perfectly.

My wife is Ukrainian, she is from another village near Uzhhorod. We studied together in graduate school, so she also teaches at UzhUni. We have two sons: David is three years old, and Daniel is one. And we also speak two languages ​​with them: I speak Hungarian, and my wife speaks Ukrainian. The youngest, Daniel, still doesn’t understand where I went, and David knows that “dad chases away bad guys.”

“The youngest, Daniel, still doesn’t understand where I went, and David knows that “dad chases away bad guys.”

A few days after the start of the war in February, Viktor came to the Military Commissariat to sign up as a volunteer in the Armed Forces. Before that, he told his family about his decision. They were, to put it mildly, not happy. However, they accepted it without objection.

During the division by military specialities, the Doctor of Physical and mathematical sciences was assigned to the artillery unit of the 128th brigade.

– There was a huge queue of volunteers and conscripts at the military commissariat, – Viktor continues . – When I submitted the documents and told where I work, one of the officers exclaimed: “Oh, we need just such people in the artillery!”. Probably due to the fact that a good gunner must know mathematics well. That’s how I got here.

Before that, he had no idea how artillery works, he had never even held a Kalashnikov assault rifle. We were shown how to handle small arms, and I learned the intricacies of artillery work already in combat conditions.

Together with his comrades in the unit, the associate professor of UzhUni endures military and field conditions: he sleeps in a sleeping bag, often on the floor in non-residential premises, warms himself using a stove, gets used to living without electricity and a stable mobile phone connection.

– I am happy if I manage to talk briefly with my relatives, and sometimes a simple text message says that everything is fine.

The vicinity of the positions of the artillery unit was repeatedly shelled by the Russians, but, thank God, all our fighters are alive and well.

Hot food and even sweets are brought to us every day (probably from volunteers), – says Viktor . – A field shower was recently installed, so you can wash yourself twice a week. I am not picky, so I consider such conditions to be normal. The commanders treat the soldiers humanely, it even surprised me a little. Morally, I was ready for tougher conditions.

“My paternal grandmother (the one who hardly spoke Ukrainian) often told me how the Red Army liberated Transcarpathia in 1944. And how Russians treated the Hungarians. It was the same as we see now in Bucha, Irpen, Gostomel and other settlements – exactly the same.” 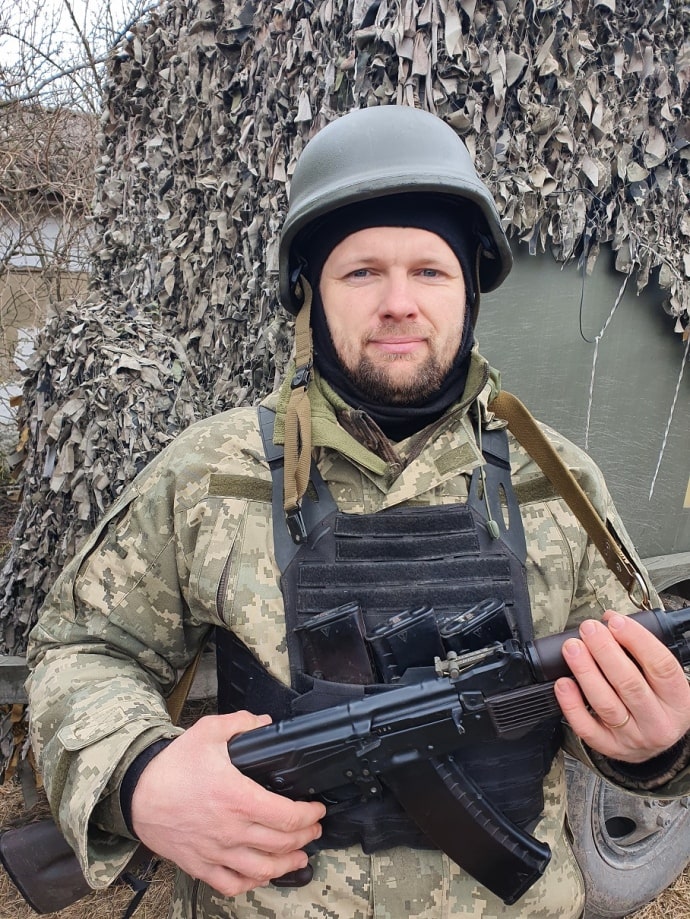 – The events of the last few days in the Kyiv region illustrate this very eloquently. My paternal grandmother (the one who hardly spoke Ukrainian) often told me how the Red Army liberated Transcarpathia in 1944. And how she treated the Hungarians. It was the same as we see now in Bucha, Irpen, Gostomel and other settlements – exactly the same.

My grandfather was repressed and sent to Donbas just because he was Hungarian. Then, years later, he was rehabilitated. My grandmother had already died, but when this war began, I remembered her stories very vividly and decided to do everything to prevent such a horror from reaching Transcarpathia again. And to Ukraine too, but for now we have what we have…

Viktor Troshka’s story might not be worth a unique one if it weren’t for one feature. On March 21 of this year, the Presidium of the Foreign Branch of the Academy of Sciences of Hungary at its meeting awarded Viktor Troshka the Oronj Janos Honorary Award “for his significant contribution to the development of science.” This is one of the highest honours of the Academy of Sciences of Hungary, which is awarded every year to both Hungarian and foreign scientists.

The honorary award ceremony, as well as a monetary award in the amount of 500 thousand forints [$1350], will take place at the general meeting of the Academy of Sciences of Hungary on May 3-4, 2022 in Budapest.

– Even before the war, we submitted materials for receiving the award, – explains Viktor Troshki. – These are my scientific articles on the topic of probability theory and mathematical statistics, which are indexed in the Scopus scientometric database and evaluated by impact factor, number of references and other criteria. And I turned out to be one of the winners.

The corresponding letter from the Academy of Sciences of Hungary came to UzhUni, and my supervisor, the director of the Ukrainian-Hungarian educational and scientific institute of UzhUni Oleksandr Shpenyk, sent me a photo of it.

The commanders already know about the award and congratulated me. But I wasn’t interested in whether it was realistic to get a vacation and go to the award ceremony, especially abroad…

“I learned about the awarding of the honorary award of the Hungarian Academy of Sciences at the front.” 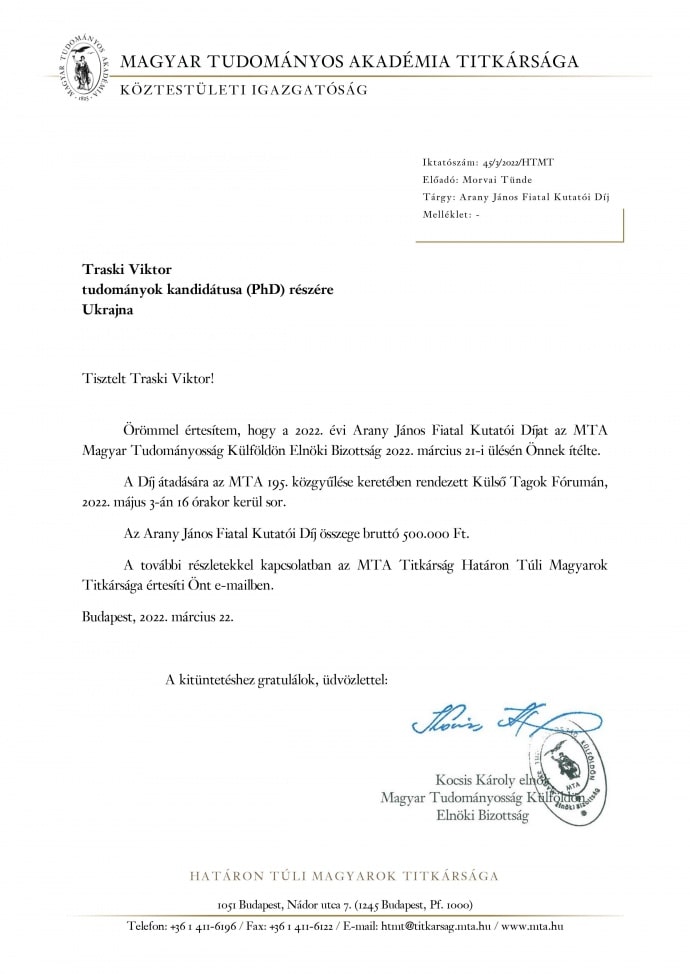 Three more Hungarians from Transcarpathia serve in the brigade unit. Viktor half-jokingly calls one of them, who is a bit older, Yonchi-bácsi [Uncle Ivan in Hungarian]. He was nearby during our conversation.

– My father Barta is Hungarian, my mother Gajdos is Hungarian, so who am I, if not Hungarian? – asks soldier Ivan Barta rhetorically. – In Hungary, my surname sounds “Borto”, and in Ukraine – “Barta”. My name is Ivan Yanovych, but at home I am Yonchi.

The parents were born under the Czechoslovak regime, so the father was recorded as Barta Jan Josefovych, and the mother as Helena Ladislavovna Gaydosh. That is, in the Czech manner. Depending on the kind of government, they way that the people’s names were recorded changed.

At home in Koropka [a village in the Mukachevo region – the author] I communicate more in Ukrainian, I know less Hungarian. The local Hungarians call me “ukran nazionalishta”, that is, a Ukrainian nationalist, – laughs Yonchi-bachi. – But I don’t pay attention to it.

In the first hours after the start of the war, he voluntarily came to the military commissar and only then told his relatives that he was going to war. “Because it is necessary to eradicate this Russian nonsense…”

“At least four of the ethnic Hungarians who died in the war had, in addition to Ukrainian, Hungarian citizenship” 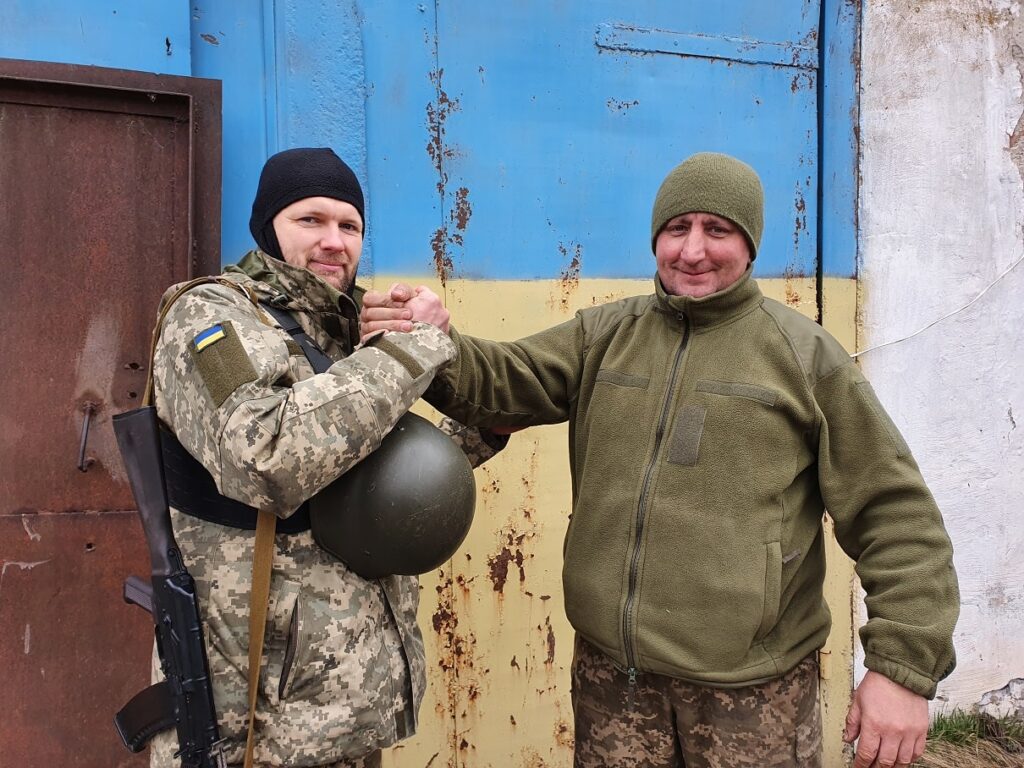 Over the course of eight years, from 2014 to the full-scale invasion of Ukraine by Russia on February 24 of this year, 100 Transcarpathians were killed in the war zone in Donbas. These are fighters of various military units, but most of them are from the 128th separate mountain assault brigade of the Transcarpathian region. Of these one hundred dead, twelve were ethnic Hungarians.

However, in reality, there are significantly fewer of them, as part of the Hungarians have left Transcarpathia for permanent residence in Hungary or other European Union countries over the past twenty years.

At one time, the author of this text worked in the civil service and supervised, among other things, the issues of ATO [anti-terrorist operation in the Donetsk and Lugansk region after the Russian hybrid invasion of 2014] participants and international relations in Transcarpathia. And he found out that out of 12 dead Hungarians, at least four had Hungarian citizenship in addition to Ukrainian citizenship. This fact was reported by relatives and friends of the deceased. Relatives of the other eight victims did not want to answer this question.

Since the beginning of Russia’s full-scale invasion of Ukraine on February 24th of this year, there is at least one ethnic Hungarian among the dead Transcarpathians – Kish Sandor Sandorovych, chief sergeant of the Naval Forces of the Armed Forces of Ukraine, from Uzhhorod. A 29-year-old military sailor died in the last days of February, leaving two children semi-orphans. The President of Ukraine awarded Sandor Kish with the Order “For Courage” III degree (posthumously).

Currently, ethnic Hungarians continue to serve in the Armed Forces of Ukraine, in particular the 128th brigade. Some of them, in addition to Ukrainian, also have Hungarian citizenship, but they do not advertise it.

The last parliamentary elections in Hungary and related statements of some officials of the Hungarian government were painfully perceived by the Ukrainian society, which has been resisting the Russian aggressor for more than a month [interview recorded in April 2022] and very much hopes for the support of neighbouring countries.

However, everyone who hypes up the Hungarian theme, without distinguishing where is politics and where are ordinary people, should remember Viktor Troshki, Ivan Barta and other ethnic Hungarians from Transcarpathia. Those who voluntarily went with weapons in their hands to defend Ukraine and, if necessary, sacrifice for the sake of their country the most precious – their own lives.